Home » NFL » 2021 NFL season: Which non-QB rookie will have the biggest impact?

2021 NFL season: Which non-QB rookie will have the biggest impact? 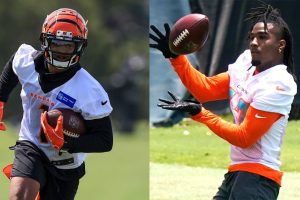 Rookies like Trevor Lawrence and Zach Wilson — who play the game’s most important position — are fully expected to make an immediate impact on their new teams in Year 1. Making an instant impact can be more challenging for non-quarterbacks, who don’t get to touch the ball on every play. Recent history tells us there’s a good chance we’ll some non-QBs make their marks in a big way when they take the field this fall, though. WR Justin Jefferson is coming off a monster Year 1 with the Vikings, and five of the six Offensive Rookie of the Year winners from 2013-2018 were non-QBs.

That said, which non-QB rookie will make the biggest impact in the 2021 NFL season?

I expect DeVonta Smith to quickly rekindle the kinship on the field with Jalen Hurts﻿. The rapport built during their two seasons together at Alabama will be on display early and often as the rookie becomes the No. 1 target and security blanket (when the pocket inevitably breaks down) for Hurts.

The Pittsburgh Steelers have been searching for a dynamic running back since Le'Veon Bell﻿’s departure. Finding that missing piece was a huge priority for the team this offseason after having a rushing attack that ranked last in the NFL in 2020. Enter Najee Harris. The Steelers couldn’t have made a better decision with their first-round draft pick, as Harris boasts the talent and skill set to provide a more balanced offense — something the Steelers gravely missed last season. The rookie will take a ton of pressure off Ben Roethlisberger and help set the tone for this dynamic unit.

The last time Joe Burrow and Ja’Marr Chase were on the field together (the national championship game to close out the 2019 season), the latter dominated with a record-setting 221 receiving yards and two touchdowns on nine receptions, while Burrow capped off his Heisman-winning campaign by setting records of his own. That synergy will carry over to the pro level and I believe it’s likely that Chase will earn Offensive Rookie of the Year honors. Atlanta’s Kyle Pitts will also be in the running for that award, but if Julio Jones does indeed end up being traded, Pitts will draw more attention from defenses, which could limit the rookie’s impact and production. That said, get ready to see plenty of Burrow-to-Chase highlights, just like we did in 2019. Same Tigers, just different uniforms.

I’ll keep this short and sweet. Jaylen Waddle is going to be the reason ﻿Tua Tagovailoa﻿ is considered Miami’s franchise quarterback after this season.

I think Alijah Vera-Tucker will have the biggest impact. Under the tutelage of Jets offensive line coach John Benton, AVT gets an opportunity to play next to Mekhi Becton and form one of the best left tackle-left guard duos in the league. He’ll get a chance to get on the field from Day 1 and play every offensive snap as a rookie. The Jets look to start trending in the right direction under first-year head coach Robert Saleh. I believe AVT and a rebuilt O-line will help give every Jets fan a sense of optimism as the Zach Wilson era gets underway. My early nickname for the Jets’ new and young left side of the O-line is the Bash Bros, and I cannot wait to see how they develop.