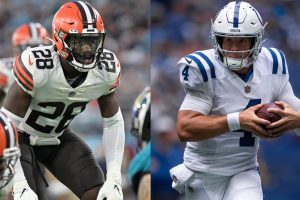 Rookies drafted in the first round draw plenty of buzz every year — but we also get regular reminders that impact first-year pros can be found outside of the top 32.

Panthers defender Jeremy Chinn (Round 2, No. 64 overall) and Colts running back Jonathan Taylor (Round 2, No. 41) are two examples from the 2020 NFL Draft that might come to mind immediately. But think also of standouts found later on, like Chiefs corner L’Jarius Sneed (Round 4, No. 138), Bears receiver Darnell Mooney (Round 5, No. 173), Rams safety Jordan Fuller (Round 6, No. 199) and Washington safety Kamren Curl (Round 7, No. 216).

Which rookies drafted outside of the first round in 2021 are in position to pop right away? Below are 11 candidates:

Stevenson rushed for 127 yards and two touchdowns on 10 carries in the preseason opener against Washington. Yes, all of those snaps took place in the second half, presumably against backup-caliber defenders, and yes, 91 of those yards came on one scoring dash in the game’s final moments. But Stevenson still showed the kind of burst that should earn him a chance to compete with Damien Harris and Sony Michel as the preseason continues to unfold. In eight of the past 10 seasons, New England’s rushing leader was either drafted in the third round or later or not drafted at all. There is a prime opportunity for Stevenson to become the latest unheralded back to thrive with the Patriots.

First, Ehlinger has a chance to start, given that he’s been splitting first-team reps with Jacob Eason while Carson Wentz recovers from foot surgery. But even before Wentz’s surgery upped the ante in the preseason competition between Ehlinger and Eason, there were signs Ehlinger was going to have a role in this offense in 2021. Namely, I’m thinking of Colts brass hinting about the potential for creativity with regard to calling plays for a player who scored 33 rushing TDs in his Texas career. So even if Eason or a yet-to-be-acquired veteran ends up being the temporary QB1 (presuming Wentz’s absence stretches into the season), Ehlinger could have a potential path to production as a short-yardage and red-zone threat, driving his placement on this list.

Like the Panthers’ Jeremy Chinn, who dazzled as a do-everything rookie in 2020, Owusu-Koramoah profiles as a hybrid linebacker/safety type who can contribute in a variety of ways. He made up for the time he missed on the COVID-19 list, showed off his ability to blitz, cover and tackle in the Browns’ preseason opener against the Jaguars, finishing with a team-high eight tackles (including three tackles for loss) and a sack.

It looks like Denver’s aggressive move to snake Williams’ out of the Dolphins’ grasp in the draft is about to bear fruit. Williams shows the earmarks of being a difference-making three-down back, further evidenced by his positive showing in the Broncos’ preseason opener (five carries, 29 rushing yards, 5.8 yards per carry). Williams is in line to split carries with Melvin Gordon this season, but I think he’ll impress to the point that Denver will confidently pencil him in as Gordon’s full-time replacement when the veteran’s contract expires after this season.

Once considered one of the top prospects in the 2021 draft class, Smith slipped to the sixth round, where the Chiefs — who confidently selected Smith despite the issue he had with blood clots in college — were able to scoop him up. Now he’s working with the first-team offense at right guard, thanks to injuries to Kyle Long and Laurent Duvernay-Tardif. Smith has a chance to establish himself (along with rookie center Creed Humphrey and youngster Lucas Niang) as a key protector of quarterback Patrick Mahomes for years to come.

There should be ample opportunity for St. Brown to grab playing time in Detroit, where an uninspiring collection of receiving talent (Breshad Perriman, Tyrell Williams, Kalif Raymond) populates the depth chart. The rookie has been drawing rave reviews from writers for his on-field performance — and from head coach Dan Campbell for his willingness to “mix it up” with teammates following an in-practice skirmish earlier this month.

The Eagles have a spotty record when it comes to drafting cornerbacks of late — but McPhearson is in position to reverse that trend after turning heads earlier in the preseason. Even if he doesn’t start immediately, McPhearson should be able to contribute in dime packages alongside Darius Slay, Steven Nelson and Avonte Maddox.

Collins opted out of his final college season, but he’s impressed his teammates this preseason. It would not be surprising if veterans Brandin Cooks, Chris Conley and Anthony Miller (who is currently dealing with a shoulder injury) were all playing elsewhere in 2022, and Collins has a chance to establish himself as a key element of the Texans’ plans for the future this season.

Holland’s interception of Andy Dalton during last week’s joint practices with the Bears was just the latest feather in Holland’s cap. But Holland is impressing coach Brian Flores with more than just his ability to generate turnovers. Flores has lauded Holland’s mastery of the defensive system and knack for getting teammates lined up properly. To me, that suggests the former Oregon standout could end up wearing a green dot on his helmet as Miami’s defensive signal-caller at some point.

The offensive line was a relative bright spot for Washington in 2020, ranking sixth in Pro Football Focus’ end-of-year hierarchy. So the fact that Washington released right tackle Morgan Moses — a solid veteran who didn’t miss a start last season — tells you how highly the team values Cosmi, who earned the best overall grade from PFF among all Washington rookies in the preseason opener while manning Moses’ old position. Cosmi’s got a chance to play an important role in this team’s attempt to defend the NFC East title.

Whether or not C.J. Henderson is traded, the Jaguars have the flexibility to potentially move on from the 2020 first-round pick, in part, because Campbell has showcased elite speed while competing with Tre Herndon at nickel corner. Campbell also has the versatility to fill a safety role, as well, making him a valuable asset when it comes to slowing tight ends in the slot.