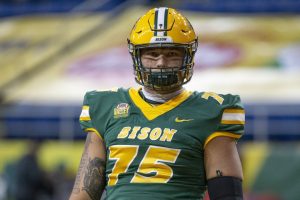 The 2021 NFL Draft is unique for several reasons, and here’s one of them:

Many teams have just 14 to 17 players rated as legitimate first-rounders, down from around 18 to 22 in a normal draft year. Consequently, for teams picking in the back half of Thursday night’s first round, odds are they’re choosing between second-round talents on many boards, or prospects who are sliding for a reason.

Toss in the COVID-altered pre-draft process — decentralized medical exams, no facility visits or private workouts, a bunch of top prospects who didn’t play much (if at all) in 2020, etc. — and you have a recipe for more surprises than usual early in the three-day event.

Here are six names you haven’t seen in many Round 1 mock drafts, but hearing them called on Thursday night wouldn’t shock NFL executives, scouts and coaches:

Basham’s pro day — which included a 4.59 40-yard dash at 6-foot-3 1/4, 274 pounds — reinforced the athletic upside of a three-year starter and team captain for the Demon Deacons who finished his college career with 20.5 sacks, 36.5 tackles for loss (at least one in 23 consecutive games) and four forced fumbles, despite missing time last season with COVID-19.

“He’s versatile. He can play a lot of different defenses. He’s kind of that outside/inside guy,” a veteran AFC scout said. “It’s Wake Forest, he’s playing good people, tape’s good. I can square that one away.”

Edge is a premium position, and there aren’t really any slam dunk first-rounders beyond Miami’s Jaelan Phillips and Michigan’s Kwity Paye. The question on Basham seems to be less about whether he’s good enough to go in the first round and more about whether he’ll unlock his full potential.

“Talented guy, but man, he is not physical, lacks passion, lacks urgency,” an AFC executive said. “He could be very good if he wanted to.”

Both helped their cause with a blazing 40 time at Georgia’s pro day: Campbell at 4.36 seconds, Stokes at 4.29.

“If there’s a run, both could go in the first,” one GM said. “I think Campbell has a little more upside. Stokes is a little closer to playing (immediately).”

Ball skills are part of the question on both players, though Stokes (6-0 5/8, 194 pounds) had four interceptions in 2020 and Campbell (6-1, 193) tied for the team lead with five pass breakups. With just two cornerbacks (South Carolina’s Jaycee Horn and Alabama’s Patrick Surtain) virtual locks for Round 1 and the stock of Virginia Tech’s Caleb Farley clouded by two back surgeries, it’s a matter of when the next tier of corners begin flying off the board: either late in the first round or early in the second.

Four tackles — Oregon’s Penei Sewell, Northwestern’s Rashawn Slater, USC’s Alijah Vera-Tucker (who also can play guard, where he might be better suited in the NFL) and Virginia Tech’s Christian Darrisaw — are virtual locks for Round 1. For some, the fifth tackle is the versatile Radunz, a first-team FCS All-America pick at left tackle in 2019 who teams think can also play inside.

Many assume Alabama’s Najee Harris will be the first running back off the board, with Clemson’s Travis Etienne also a candidate to sneak into Round 1. But multiple scouts and coaches said they won’t be shocked if Williams ends up going in the first round, too.

“I love Javonte Williams,” a high-ranking AFC executive said. “I think he’s the best back in the draft.”

At 5-9 5/8 and 212 pounds, Williams isn’t as big as the 235-pound Harris. But he packs a punch (perhaps best displayed on his viral run against Miami in December) and showed off impressive all-around athletic ability at his pro day (4.55 40, 22 bench reps, 36-inch vertical jump and a broad jump of 10 feet, 3 inches). A team such as the Steelers, who have been linked extensively to Harris at No. 24 overall, would be logical fit.

It’s anyone’s guess who the fourth receiver will be off the board after LSU’s Ja’Marr Chase and Alabama’s DeVonta Smith and Jaylen Waddle. Minnesota’s Rashod Bateman will be in the mix. Ole Miss’ Elijah Moore has gained steam late. Florida’s Kadarius Toney and Purdue’s Rondale Moore come up as possibilities, too. But several teams echoed what one AFC coordinator predicted a couple weeks ago: “Dyami Brown could sneak up in there.”

Is it a long shot? Sure. But this is the year for it.

Want to create your own mock for the 2021 NFL Draft? Check out PFF’s draft simulator to play out countless scenarios for every team spanning all seven rounds.