Home » 2021 NFL draft: Pros and cons for every first-round pick

2021 NFL draft: Pros and cons for every first-round pick 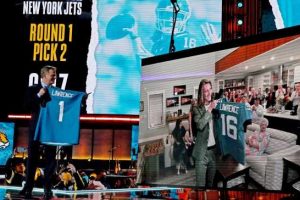 The 2021 NFL draft began Thursday and continues through Saturday (ABC/ESPN/ESPN App). We will have the pros and cons for each of the 32 first-round picks. The Jacksonville Jaguars kicked off the draft by selecting Clemson quarterback Trevor Lawrence with the No. 1 selection. The New York Jets and San Francisco 49ers also went QB at Nos. 2 and 3 with Zach Wilson and Trey Lance, respectively.

We will track all 259 picks for Rounds 1-7, and you also can see all of the best available draft prospects.

Here is the draft order heading into the first round. ESPN NFL Nation reporters will analyze each pick live.

Why they picked him: Lawrence is the most polished QB prospect since Andrew Luck and ESPN NFL draft analyst Mel Kiper Jr. ranks him behind John Elway, Peyton Manning and Luck among QBs he’s graded. The Jaguars’ offense the past decade has been awful and QB play is a big reason. The Jaguars were last in points scored and ranked 30th or worst in QB completion percentage, Total QBR, passer rating and passing yards in the league from 2011-20 with Blaine Gabbert, Chad Henne, Blake Bortles, Nick Foles, Gardner Minshew II, Jake Luton and Mike Glennon taking snaps. Lawrence was 34-2 as a starter at Clemson and threw for 10,098 yards and 90 touchdowns with only 17 interceptions in three seasons. He won a national championship as a freshman and led the Tigers to two more playoff appearances.

Biggest question: There’s no such thing as a perfect prospect but Lawrence is close. Jaguars GM Trent Baalke, when asked about what he learned about Lawrence that he didn’t know during the pre-draft process, said: “No negatives.” There was a brief stir about Lawrence’s comments in a Sports Illustrated piece that he doesn’t have a chip on his shoulder and his high school coach’s comment that Lawrence could walk away from the game and be fine. That may have riled up some fans but Lawrence addressed those comments several days later and reassured everyone he is motivated and does want to win. — Michael DiRocco

Why they picked him: The Jets traded Sam Darnold, in part, because they believe Wilson can be a franchise quarterback. Among the QBs not named Trevor Lawrence, Wilson stood out to them because of his arm talent and ability to make quick reads in and out of the pocket. The Jets’ quarterback clock is officially reset — again.

Biggest question: Can he really be a Week 1 starter? The NFL could be culture shock for Wilson, who dominated weak competition in 2020. The smart move will be to ease him in slowly, letting him learn from a vet — assuming they add one at some point. — Rich Cimini

Why they picked him: The 49ers were unafraid to make a bold trade up the board to No. 3 and equally unafraid to take the player who is the draft’s biggest mystery. That would be Lance, who fits the bill of “biggest, fastest and strongest” quarterback coach Kyle Shanahan said he’s looking for. At 6-foot-4, 226 pounds, Lance brings a powerful right arm, quick feet, quick processing skills and the maturity to handle everything Shanahan will ask him to do in his offense. Lance’s lack of experience — with 17 starts at the FCS level — are offset a bit by the fact Lance spent more time under center running Shanahan staples than any of the other top quarterback prospects. Lance’s ball security is also appealing to the 49ers after he went 287 consecutive attempts without an interception in 2019. There’s plenty of risk here but the reward could be huge.

Biggest question: Can Shanahan and the 49ers get Lance to reach his potential? That lack of experience against top competition makes Lance the biggest unknown quantity among the top quarterbacks in this draft. While Lance has drawn comparisons to Buffalo Bills quarterback Josh Allen because of his physical traits, he also comes with accuracy questions (50% completion rate in 2020, 67% in 2019) similar to those Allen had when he arrived in the NFL. Lance’s floor might be lower than the other top quarterback prospects but his ceiling might be higher, especially if he gets the chance to settle in behind Jimmy Garoppolo for a season before becoming the starter. At 20, Lance is just scratching the surface on his potential, which puts the onus on the 49ers to help him reach it. — Nick Wagoner

Why they picked him: Pitts might be the most talented non-quarterback in the draft — and perhaps the most gifted player regardless of position. He might be listed as a tight end but he has the traits of a dominant big receiver at 6-foot-6, 245 pounds with a reported 4.44-second 40-yard dash time. He can line up all over the formation for coach Arthur Smith, who came up as a tight ends coach. Pitts can play out wide, in the slot or in line as a tight end and be a matchup issue throughout. Falcons general manager Terry Fontenot called him “a special player” Wednesday.

Biggest question: Tight ends typically don’t go this high in the draft (Vernon Davis was earliest selection for a TE at No. 6 overall in 2006) and the transition from college to pros is a difficult one that usually takes a year. But Pitts is going to be looked at to be a Day 1 impact player, so he’ll have to defy history. The question is whether the Falcons did the right thing taking Pitts over a quarterback with Matt Ryan, who soon will be 36 on May 17. Only time will tell. — Michael Rothstein

Why they picked him: The Bengals are looking for this year’s first-round pick to be an immediate contributor. Chase showed a knack for that in his final season at LSU (84 catches, 1,780 yards, 20 TDs in 2019), when he and Bengals quarterback Joe Burrow led the Tigers to a national championship. Chase is another big-play wide receiver that could open up the team’s offense.

Biggest question: Will Chase’s physical style still be successful in the NFL? Also, as good as Chase could become, the Bengals will need their pass protection (Burrow was sacked 32 times before his season-ending knee injury) to improve in 2021 in order for Burrow and the passing attack to be effective. — Ben Baby

Why they picked him: A need for speed. Waddle is believed to be the draft’s fastest player even though he didn’t test because of a fractured ankle. With elite run-after-catch and deep-ball ability, Waddle is a good description of the game-changing playmaker the Dolphins need to help QB Tua Tagovailoa. When faced with a choice between reuniting Tagovailoa with one of his two former Alabama receivers, they leaned toward the bigger, faster and more electric Waddle over the more productive and polished DeVonta Smith.

Biggest question: Can Waddle become a complete No.1 receiver? Waddle was never the most productive receiver at Alabama with Jerry Jeudy holding that title in 2018 and Smith dominating in 2019 and 2020. Lofty redraft comparisons to Tyreek Hill made headlines, but Waddle is far less advanced as a route runner and against press coverage than Waddle, so he’ll have to make big jumps there to become Miami’s No.1 receiver. — Cameron Wolfe

Why they picked him: Sewell was arguably the best available option at his position throughout this entire draft class. Detroit has added another strong option, who will likely be an instant starter to an already good offensive line to give extra protection to new quarterback Jared Goff. He fits the mold of what the Lions are building under new general manager Brad Holmes and head coach Dan Campbell with toughness and grit by selecting the 2019 Outland Trophy winner – which is awarded to nation’s best interior lineman.

Biggest question: Sewell opted out of the 2020 season, so it remains to be seen how that impacts him. Although Sewell is quick on his feet, some may wonder if his strength and technique will translate onto this stage, but he seems to be the safe bet at No. 7 under the new Lions regime. — Eric Woodyard

Why they picked him: A press corner was the one position general manager Scott Fitterer believed could help the roster the most outside of tight end Kyle Pitts and left tackle Penei Sewell. In Horn the Panthers have a physical, big corner with great wingspan, something Seattle believed in when building its championship teams when Fitterer was there. With injury-prone Donte Jackson entering the last year of his contract the Panthers have a long-term solution at one of the corner spot.

Biggest question: Quarterback Sam Darnold better be good, because the Panthers had a shot at Justin Fields, a player many believed to be at least the third-best quarterback in the draft. This pick shows Carolina believes in Darnold and is going to give him every chance to succeed. It also shows the Panthers believe a player like Horn can help them win now. — David Newton