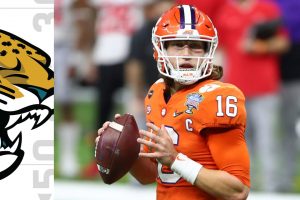 The 2021 NFL Draft has officially begun, with the Jacksonville Jaguars selecting Clemson quarterback Trevor Lawrence at No. 1 overall. Below is Bucky Brooks’ analysis for every player drafted in Round 1.

You can follow all of the selections with our NFL Draft Tracker and tune in to NFL Network, ABC and ESPN for live coverage. The draft will also be streamed live via NFL.com, the NFL app and ESPN digital properties.

NOTE: Only trades agreed to after Day 1 began are reflected below.

The Clemson standout is the ultimate QB1 and prototype at the position with a combination of arm talent, athleticism, leadership skills and winning pedigree to transform any franchise.

The ultra-athletic playmaker mixes exceptional arm talent and improvisational skills as a magician from the pocket. He displays Aaron Rodgers-like play-making ability as a passer with the capacity to play on or off the script.

The small-school standout is an intriguing quarterback prospect due to his rare traits as a big, athletic playmaker with exceptional arm talent. Despite a small sample size of performance and production, Lance has all of the traits offensive coaches covet in a high-IQ quarterback with a diverse toolbox.

The draft’s unicorn is a unique talent utilizing his NBA power forward-like size and All-Pro-caliber receiving skills to create mismatches all over the field. Pitts will command double coverage from Day 1 while moving the chains or scoring touchdowns from the slot or perimeter.

The crafty pass catcher from LSU is a ball magnet with a rugged game that’s ideally suited for a role as a WR1. Chase routinely wins 50-50 balls while also flashing big-play ability as a catch-and-run specialist on the perimeter. He is a terrific pass catcher to build a passing game around.

The speedster is the most explosive run-after-the-catch playmaker in the class. Waddle adds a dimension to the offense with his ability to score from anywhere on the field as a deep-ball specialist or catch-and-run scorer.

The big dancing bear is the prototypical tackle offensive coaches covet in a blindside protector. Sewell snuffs out elite rushers off the edge while also displaying the strength and power to move defenders off of the ball. With the Oregon product considered a scheme-friendly fit for any system, it is not a surprise that he is one of the first players to come off the board.

Horn is an explosive athlete with the tools to evolve into a shutdown corner. He has the ability to neutralize opponents with an aggressive bump-and-run style that also mixes in some shadowboxing techniques at the line of scrimmage. He isn’t a finished product but his potential makes him an easy pick for a Panthers team looking for a premier cover corner.

Surtain is a polished cover corner with rock-solid fundamentals and exceptional instincts. He plays the game like a savvy vet and his overall consistency in coverage is a testament to his diligent work on the practice field and in the film room.