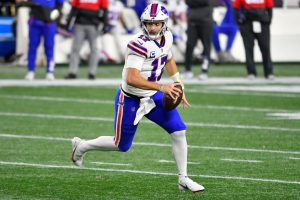 1) Josh Allen swiped nearly every single-season Bills passing record. The dynamite QB opened the game with an INT on the first drive. After the shaky start, Allen settled in and diced up a Dolphins defense with a bevy of quick strikes and pinpoint deep shots for scores. With 224 yards and three TDs, Allen broke ﻿Drew Bledsoe﻿’s record for most passing yards in a single Bills season. As he was all season, Allen was unstoppable once he got rolling. The Dolphins couldn’t cover ﻿Stefon Diggs﻿ (7/76), and ﻿Isaiah McKenzie﻿ caught two TDs and scored another on a punt return. While the Dolphins entered as the team needing to win to make the postseason, it was Sean McDermott’s squad that played with precision, purpose and fire, even when backups took over. It took Allen and Co. just one half of work to sprint out to a big lead and secure the No. 2 seed in the AFC. McDermott’s squad didn’t need to win today and could have rested everyone. Instead, the Bills (13-3) utterly obliterated a playoff hopeful in all three phases, even when the backups took over. It’s a victory that has a dangerous, balanced Bills squad rolling into the postseason on a huge high.

2) With no ﻿Ryan Fitzpatrick﻿ backstop Sunday, it was ﻿Tua Tagovailoa﻿ chance to sink or swim. The Dolphins (10-6) drowned. In the first half, the QB ran a horizontal offense that never threatened up the field. The QB missed several throws, looked reticent to force it into coverage, and lacked confidence we’d seen from him early this season. After averaging just 4.1 yards per play in the first half, the Dolphins were forced to fling it around in the second half while down big. Tua proceeded to miss several throws, tossing three second-half interceptions. He stretched the field more in the final two quarters, but several of those tosses sailed and went for INTs. After having good interception luck this season, the Football Fates flipped the script Sunday, with the rookie QB tossing a pick-six when ﻿DeVante Parker﻿ fell, and back-to-back INTs to wipe out any comeback chances. The rookie finished with 35-of-58 for 361 yards with one TD much in garbage time. Tua’s play will be under the microscope, but the loss wasn’t all on the QB, with several drops by receivers and zero run game to help early. Unless the Colts lose to Jacksonville in the late window, the offseason will start for Miami. After an up-and-down rookie season, Tua will have a full offseason to improve heading into Year 2.

3) The loss shouldn’t be all on the Dolphins’ offense. A defense that had been stingy all season got torched by Allen in the second quarter, giving up three straight TD drives that turned a close game into a 22-point game at the half. The defense then let ﻿Matt Barkley﻿ divebomb them to keep the Bills onslaught on deep into the contest. Brian Flores’ club fought all season, but looked like it gave up the ghost as the playoff prospects dwindled. Now, the Dolphins become the biggest Jacksonville fans in the country.

1) Bucs WR ﻿Mike Evans﻿ broke ﻿Randy Moss﻿’ NFL record for consecutive 1,000-yard receiving seasons to begin a career with his seventh, but he didn’t have long to enjoy the milestone. On the next play, on an in-breaking route, he beat Falcons rookie ﻿A.J. Terrell﻿ for a would-be touchdown, but took an awkward step just before Tom Brady’s pass arrived. Evans dropped the pass and limped off the field with what appeared to be a left knee injury. He did not return, finishing with just three early catches for 46 yards. Following the game, coach Bruce Arians said it didn’t look to be serious, but the Buccaneers (11-5) would know more Monday.

2) Without two key defenders in ﻿Shaquil Barrett﻿ and ﻿Devin White﻿ available due to COVID-19 protocols, the Buccaneers No. 1-ranked run defense held up relatively well against the Falcons. Brian Hill broke a 62-yard run to the right side to key a second-half touchdown drive that pulled Atlanta within 30-27, but other than that Bucs breakdown, the Falcons generated very little on the ground. It figures: Atlanta entered with the league’s 29th-ranked rush offense.

3) As the Falcons (4-12) enter the offseason, their final contest provided a clear look at one of the club’s biggest draft needs: Defensive end. Atlanta, which jettisoned a first-round investment at the position in releasing ﻿Takkarist McKinley﻿ earlier this season, got very little edge pressure on Bucs QB ﻿Tom Brady﻿. The result was a field day for Bucs receivers ﻿Antonio Brown﻿ and ﻿Chris Godwin﻿ , both of whom had more than 130 yards and two touchdown catches each. ﻿Dante Fowler﻿ provided a late sack, but Atlanta will need to generate more heat on quarterbacks come 2021.

1) Bill Belichick’s Patriots have swept the Jets for the fifth-straight season, and there were some silver linings in a victory that capped off a disappointing year. Several young players contributed to the win: Linebacker ﻿Chase Winovich﻿ had a two-sack performance with multiple QB hurries, running back ﻿Sony Michel﻿ had a productive day (124 scrimmage yards, receiving TD), cornerback ﻿J.C. Jackson﻿ got his ninth interception this season (11th takeaway this year), and rookie tight end ﻿Devin Asiasi﻿ caught his first career touchdown off that turnover for the go-ahead score in the third quarter. Remarkably, Asiasi’s TD was the first by a Patriots TE this season. The Patriots (7-9) finish under .500 for only the second time this millennium, and for the first time since Belichick’s inaugural season in New England.

2) Whether he’s back in New England or not, ﻿Cam Newton﻿ left his imprint in Patriots lore after setting the franchise’s mark for most rushing yards (592) by a quarterback in a season, passing ﻿Steve Grogan﻿ (539 yards in 1978). Newton set the record with a 49-yard run in the game’s opening drive, which was the longest QB run in Patriots history. Newton also had his best game throwing the ball as a Patriot, finishing the day 21-of-30 for 242 yards and three passing TDs (79 yards rushing). Newton also caught a TD pass from wideout ﻿Jakobi Meyers﻿. It was the first time this season Newton had multiple TD passes, and the veteran QB was engaged with his teammates all the way through a meaningless game. Newton, 31, is set to become a free agent this offseason.

3) The Jets (2-14) capped off a historically bad season the only way they could, and they have secured the No. 2 overall pick in the 2021 Draft. It’s not as if the Jets were never in the game, either. With the game tied at 14 late in the third quarter, an unforced INT by ﻿Sam Darnold﻿ started the Jets unraveling. Darnold threw another bad pick in the red zone during the fourth quarter, which put them out for good and solidified an ugly outing. Darnold ended the day 23-of-34 for 266 yards and one TD (two INTs). Tight end ﻿Chris Herndon﻿ led the Jets offense with seven receptions for 63 yards and a TD. Adam Gase’s job security is now in question after a two-win season (worst since the Jets’ one-win season in 1996) . Gase accumulated a 16-32 record in his three seasons as head coach.

1) Two defenses that struggled this season did their part to set up an offensive shootout Sunday. Quarterbacks ﻿Matthew Stafford﻿ and ﻿Kirk Cousins﻿ didn’t disappoint, with Cousins throwing for 405 yards and three touchdowns. The Lions played relatively soft coverage as Cousins found easy first downs underneath. Stafford threw for three scores, as well, and could have gone far north of his 293 yards were it not for a couple of drops. Lions RB ﻿Adrian Peterson﻿ , at 35, looked young in slashing for 63 yards on only seven carries.

2) With ﻿Dalvin Cook﻿ enjoying a career-best season, Vikings fans haven’t seen much of backup RB ﻿Alexander Mattison﻿ this season. But with Cook unavailable for personal reasons, Mattison looked like a back with something to prove in rushing for 95 yards and a touchdown on 21 carries. Don’t tell Lions DB ﻿Tracy Walker﻿ about the drop-off from Cook to Mattison; on a fourth-and-2 play in the first quarter, Mattison juked Walker off his feet with a stop move near the right sideline to finish a 28-yard touchdown reception.

3) ﻿Justin Jefferson﻿ capped a brilliant first season with the Vikings by breaking the Super Bowl-era rookie record for receiving yards. The former LSU star and 2020 first-round pick, who combines deep-threat speed with the length to make contested catches, caught nine passes for 133 yards against the Lions. The season-ending performance gave him an even 1,400 on the year, breaking a record held by ﻿Anquan Boldin﻿ since 2003 (1,377).