WNBA: Who will be crowned MVP? 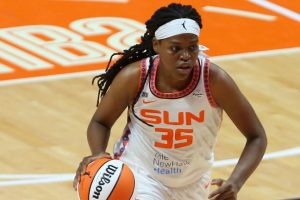 The Most Valuable Player trophy is an individual award. That might seem obvious, but it’s worth mentioning in this year’s WNBA season.

No winner has ever earned it alone. You need five people on the court at all times, but there are players that stand out from the crowd. They help their team win while clearly being the best player, but unlike some other leagues, the MVP doesn’t have to come from the WNBA’s best team.

In fact, 14 of the 24 MVPs in league history came from a team without the best record – and seven of them were either tied for the second-best record or finished even lower.

Elena Delle Donne won the MVP that season with the Chicago Sky. They weren’t devoid of talent but only really had Cappier Pondexter in her peak to support Delle Donne. Courtney Vandersloot had only just taken over lead point duties, Allie Quigley wasn’t even a full-time starter and Betnijah Laney was a rookie.

There was so much on Delle Donne’s shoulders that finishing as the third seed was an achievement, and they were unable to keep it up in the playoffs, falling to the Indiana Fever in the conference semi-finals. Since 2016, every MVP has come from the team with the best record, and so far this season, it looks like the league is on a similar trajectory. This year, however, will face interruptions due to the Olympics – including 5×5 and 3×3 – as well as EuroBasket, AmeriCup and other competitions. It’s also seen a delayed start for some players due to overseas leagues, and it is unclear if other players will come to – or return to – the WNBA this season after their international commitments are over later in the summer.

But that is then. For now, nearly a third into the WNBA season, the top five MVPs break down to be something like the following.

The Connecticut Sun center is head and shoulders above the rest of the pack 10 games in to the WNBA season.

With Tina Charles stepping up due to a lack of Elena Delle Donne and Emma Meesseman on the Washington Mystics, the 2012 MVP is leading the league in scoring with 26 points per game, but Jones is not far behind that with 21.

The Sun also rely on Jones to grab a league-leading 10.4 rebounds per game, while currently sitting in the top 10 in blocks. Her all-around talent has helped Connecticut land the best record in the WNBA so far. She leads the league in Win Shares – the estimated number of wins contributed by one player – but her efficiency is what helps her stand out.

They have only played four games in the Commissioner’s Cup, but the Sun are undefeated while doing so, and they’ve only lost two games in the regular season for the league’s best record.

The only problem? Jones is off to EuroBasket to play for Bosnia & Herzegovina and could be out for six games. In a short season like the WNBA, a small amount of games means a lot in the MVP race, especially when the rest of the league will shut down during the Olympics when some of the other candidates will be playing for their countries, unlike EuroBasket.

Jones has built up a good lead but will it be enough to hold off her MVP competitors? The reason Jonquel Jones is the leader of the MVP pack so far is because the league’s other teams are relying equally on two or more players to put them in a winning position.

Jewell Loyd and Breanna Stewart were No 1 draft picks for the Seattle Storm in back-to-back years, so it only makes sense that this guard-forward partnership has become the dominant one-two punch in the WNBA.

When they are on the court together, the Storm scores 70 points per game. Stewart scores 22 and Loyd adds in 20, and they have each been responsible for winning games this season, including some buzzer beaters.

It’s difficult to state who is more important to Seattle. History would suggest it’s Stewart. She has won the MVP award once before, in 2018, and has been the Finals MVP twice, but Loyd is putting up career bests in scoring, defensive rebounds, assists and steals. They are neck and neck in terms of Win Shares but Stewart possibly gets the nod with a slightly higher usage rate.

Stewart’s individual brilliance is arguably enough to claim the MVP trophy, but her team doesn’t quite have the best record in the league, and Loyd’s presence means that the load is that much lighter compared to Jonquel Jones. They look more likely to win a championship – and it would be the first team to go back-to-back since the LA Sparks in the early 2000s – but so far the regular season has belonged to the Connecticut Sun.

Is there a duo having more fun than A’ja Wilson and Liz Cambage this season?

moment I stop havin' fun with it, I'll be done with it https://t.co/gEsyGUJkgB

The forward-center partnership has the potential to be awkward. They both like to play on the low block – though, Wilson has a penchant for the mid-post and high-post – and they are most devastating when a play is run through their hands. But they take it in turns to torture their opponents, and each has an ability to pass out of double teams that ranks among the best in the league.

The reason they are a step behind their MVP rivals of Breanna Stewart and Jewell Loyd comes down to the fact that their Las Vegas Aces lost the head-to-head match-up earlier this season and the Seattle Storm managed a win over the league-leading Connecticut Sun.

Wilson and Cambage combined for just 24 and 14 in a loss to Jonquel Jones’ team in the first game between the two sides – the one that caused controversy after Sun head coach Curt Miller made comments about Cambage’s weight. The Australian big got her individual revenge by putting 28 points on Connecticut in the grudge match, but her Aces fell short again.

While Cambage has a scary ability to put up big numbers and anchors the defense with 2.2 blocks per game, Wilson is the more reliable scorer and playmaker. The fourth-year forward scores 18.6 points per game, with eight rebounds and three assists.

As the reigning MVP, she is the more likely candidate, but having Cambage on the team this season – as well as several others who can carry the load on this improved roster – will split the vote and neither will be the favourite unless they close the gap when Jones is away.

Big-time numbers in the @LVAces’ win 🤩 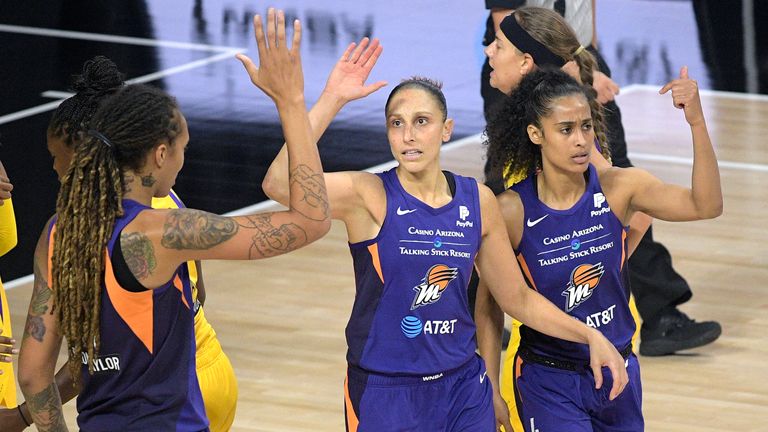 The New York Liberty have improved dramatically compared to last season, when they managed to win just two games in the Florida ‘wubble’. They’ve added a number of veterans to the roster, their No 1 draft pick is fully healthy, but there is also a new star in town.

Casual fans are well aware of Sabrina Ionescu’s ability to control the flow of a game in every facet. It took just six games as a professional basketball player to notch a triple-double and she’s already hit game-winning buzzer beaters.

But the New York Liberty are playing winning basketball, and arguably the main reason for that is the arrival of Betnijah Laney.

Now in her seventh year as a professional, and her sixth season in the WNBA, Laney has bounced around the league looking for the right fit. She found it last season with the Atlanta Dream, who empowered her to be a playmaker and a go-to scorer while the team was in transition from one core to another.

After averaging 3.6 points in her first four WNBA seasons, Laney exploded to score 17 per game with Atlanta, and she’s taken another leap up to 20 points in each contest this year.

New York Liberty star Betnijah Laney has scored 20+ points in all eight of her games this season.

The other players in WNBA history to score 20+ points in the first eight games of the season:

The pairing is figuring out the structure of the team this year – the most important thing for them is to play winning basketball. It’s unclear who the most important player is four weeks into the season, but right now it doesn’t matter. If they can focus on continuing to progress, this team could be a contender in future seasons.

Without Diana Taurasi out due to injury, the Phoenix Mercury have needed the other two members of their big three to step up. In particular, they needed Brittney Griner to be the in-form player who showed what she was still capable of in Europe this past year with UMMC Ekaterinburg.

For years, Griner has not lived up to expectations. At 6ft 9in, she has typically been a weak rebounder for her size, but this season she is averaging a career-high 9.6 – 1.5 better than her best totals in the WNBA.

Dunks are a good indicator for how engaged Griner is, and she has several this season already – attacking the basket out of a pick and roll, or driving to the hoop when she would settle for a jumper in previous years.

Her energy is a weather bell for the Mercury, which is why she gets a nose ahead of her team-mate Skylar Diggins-Smith in terms of MVP-worthiness, but the guard is also stepping up in her second year with Phoenix. Her 19 points and five assists lead the team and have put them with a winning record as we approach 10 games in the regular season.

Neither Mercury player would win the MVP if everything ended today, but with more than two-thirds of the season yet to play, a lot could change – and if Phoenix finish as one of the best records in the WNBA, one of them could be in the conversation.