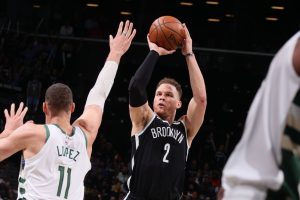 Months ago, when Blake Griffin came to terms that he was going to forego $13.3 million to get out of his contract with the Detroit Pistons, he’d come to terms with the fact that he was no longer a franchise player in body or mind.

But that did not mean he could no longer be a contributing player in spirit.

He felt he had something left to give, maybe a couple of years of it if he’s lucky, which he hasn’t been very often if we’re being honest. For that price, in both dollars and ego, what he wanted was happiness and to play meaningful basketball again.

On Saturday, Griffin played in a conference semifinal playoff game for the first time in six years. It felt even longer, as those days as a leading man of the Lob City Clippers feel like they only exist in YouTube highlights.

He played like he’d longed for it, flinging his body around and playing with the edge the Brooklyn Nets will need to beat the Milwaukee Bucks four times. Griffin’s 18 points, 14 rebounds and critical hustle plays that factored in Nets edging the Bucks, 115-107.

Late in the fourth quarter with the game in hand, the crowd of 15,750 at Barclays Center gave Griffin a standing ovation after he fouled out and retreated to the bench. It’d been awhile since he’d felt something like that, too.

“For two years, I didn’t hear much positivity and probably rightfully so,” Griffin said. “It’s pretty crazy how crazy it happened so I’m just thankful for this chance and the opportunity.”

The last time Griffin was at this stage he was perhaps at the peak of his game back in 2015, at age 25 with five straight All-Star appearances and his health intact. He’d finished third in the MVP voting the season before, and in the conference semifinals against the Houston Rockets he was a pure force, averaging 24 points, 13 rebounds and seven assists. He was at this remarkable sweet spot, where his physical gifts were blending with skills he’d honed.

In this Game 1 six years later, Griffin was mostly relying on those skills he’d learned. His physical gifts are largely diminished but he has become a better shooter as he showed by nailing four 3s as the Bucks gave him space. And his role on the team called for him to battle in the trenches, which he did endlessly for 35 minutes.

“It’s beautiful to see him work and preserve and get an opportunity,” Nets coach Steve Nash said. “He obviously was great tonight and his energy and fight was outstanding.”

A prickly reality about Griffin, those who were around him over the last five years say, is that he wasn’t a very good teammate at times. It wasn’t the only reason the Clippers traded him, his injury history and worrisome contact were higher on the list, but it was one of them. The headline came when he punched out the Clippers’ equipment manager and broke his hand, but below the surface there were more incidents with both teammates and coaches.

Part of the mission when he came to Brooklyn was to restore respect from teammates. With ones like Kevin Durant, Kyrie Irving and James Harden, the only room for him was that he fall into a role and show leadership by not just accepting it, but excelling in it.

In his first weeks with the team, it wasn’t the Hall of Famers he shared the locker room who inspired Griffin. It was 24-year-old teammate Bruce Brown, a guy who came into the league as a guard and ended up playing center at times, as he looked for a role to slip into that would support the group.

That is what Griffin did in Game 1, a long way from the 2015 superstar or even the 2019 All-Star. But his contributions were exactly what the Nets need in this series, where they are outmanned in the middle and will be under constant attack. Milwaukee still scored 72 points in the paint, the third-highest amount in the playoffs in the last 25 years.

Griffin knows there’s more challenges ahead, particularly with the uncertainty of Harden’s hamstring injury, but he also knows where he fits. Being there this late in the season and this late in his career has him in a place he’s wanted for so long. In a way he maybe never expected.

“Being a part of something bigger than yourself takes precedence,” Griffin said. “You do whatever it takes.”