Home » Why MPJ., the last piece of Denver’s Big 3, has been leaving his “emotion at the gym”

Why MPJ., the last piece of Denver’s Big 3, has been leaving his “emotion at the gym” 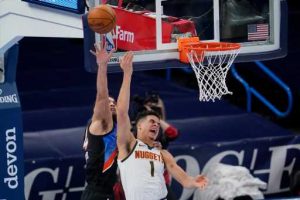 Don’t be fooled by the lopsided nature of Saturday’s win.

Baked inside of Nikola Jokic’s ho-hum triple-double and Jamal Murray’s game-high 26 points, were the seeds of a fledgling Big 3 with emerging force Michael Porter Jr. Denver’s budding trio combined for 65 points, 23 rebounds and 18 assists as the Nuggets pummeled an overwhelmed Thunder squad.

“When we have a game like this, when everybody’s sharing the ball, it’s so easy to do whatever,” Jokic said when asked about his growing chemistry with Porter. “This game needs to show us how we can play.”

Jokic either assisted or screened on five of Porter’s seven made shots on Saturday. On another, he played hot potato with Murray, who eventually gave the ball back to Porter for a wide-open 3-point make.

Asked whether those plays were an indication of the growing chemistry between the trio, Porter gave a quick retort.

“It better, we better figure it out,” he said with a smile. “ … That play where I just hit Joker, he knew immediately I was going to come back off for that shot and he screened it for me. Plays like that, that’s just chemistry plays that happen with time. Those aren’t play calls.”

And even if the interplay between Porter and Murray is still a work in progress, the respect is there. When Jokic flung an outlet pass midway through the first quarter that found Porter open for 3, Murray’s arms shot up in the air, like a ref signaling a made field goal. Publicly, even when Porter was struggling with his shot through most of February, Murray was always the most vocal in supporting him.

As lethal as Jokic and Murray have proven to be, both know Porter has the potential to significantly elevate the team’s ceiling. Saturday was the third consecutive double-double he registered, which also included a string of 10 3-pointers in that span.

After the game, Nuggets coach Michael Malone lauded his growth.

“What I love about Michael is that he’s becoming a complete basketball player,” Malone said. “ …  I thought the rebounding and the defense by Michael Porter was on-point tonight.”

This is where Porter deserves immense credit. When his 3-point shot was uncharacteristically off the first two weeks of February, Porter honed in on the other aspects of his game – moving without the ball, hitting the glass, locking in on defense.

After games, he said he’d consult his dad, his trainer or other mentors about what they’d seen. The result was a “mindset change” he said.

“Even when my shot wasn’t falling, I really tried not to find my energy from making shots,” Porter said. “If I can just continue to put all those (components) together, night in and night out, not take nights off, not take plays off, I think that that shooting slump is going to be a blessing in disguise.”

Within that rare slump, what Porter learned was how to isolate his scoring from the rest of his game. Instead of letting his scoring bleed into other aspects, he practiced taking the emotion out of the game.

“For me it is, and I think for a lot of players to reach that greatness, especially on both sides of the ball, you gotta learn how to do that,” he said. “… You can’t feed too much into what the media says, what they say on Instagram about you. There’s gonna be times during the game where you’re not playing good, and you have to learn how to just flip the switch and not dwell on the past play.

“.. So for me, lately, I’ve just been trying to leave my emotion at the gym,” Porter said. “If I’m frustrated after a game, it’s OK. But I’ll write down three things I think I could’ve done better, three things I think I did good. And then just leave it at that. Don’t have too much emotion because there’s so many basketball games.”

That Porter has begun to control the mental side of being a pro is a massive development in his growth as a player. And if the Nuggets can channel the offensive explosion they authored against Oklahoma City, there’s no telling what Denver’s Big 3 might be able to achieve.