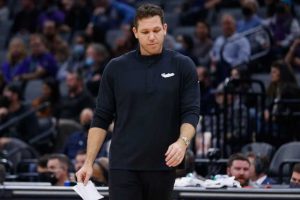 Luke Walton’s time with the Kings has reportedly come to an end.

According to ESPN’s Adrian Wojnarowski, the Kings have fired Walton as the team’s head coach following a 6-11 start on the season.

Why did the Kings fire Luke Walton?

After the Kings finished 31-41 in back-to-back seasons, Sacramento general manager Monte McNair made it clear that he expected the team to earn a playoff berth in 2021-22, putting a lot of pressure on Walton early in the campaign. The Kings have not reached the postseason since 2006.

McNair was supportive of Walton to start the season, saying that he had done a “great job” with the players and coaching staff, but the confidence in Walton began to wane as the Kings dropped games against less-than-stellar opponents and landed near the bottom of the Western Conference standings. During one November stretch, Sacramento lost six out of seven games, including an embarrassing performance against Toronto at home that featured a group of fans at the Golden 1 Center chanting “Fire Luke Walton.”

Walton was unable to consistently produce wins throughout his tenure, and the front office finally ran out of patience. Now the Kings will hand a roster featuring talented players such as De’Aaron Fox, Tyrese Haliburton, Buddy Hield, Harrison Barnes and Richaun Holmes to someone else.

Who will replace Luke Walton as the Kings’ coach?

According to Wojnarowski, Alvin Gentry is expected to get “strong consideration to serve as interim head coach.”

Gentry is currently an associate head coach on the Kings. Prior to joining the Kings, he was the head coach of the Pelicans for five seasons.

“I have known Luke for many years and I am so excited to welcome him and his family to the Sacramento Kings,” Divac said at the time. “I look forward to his leadership on the court as we work to build a winning culture for many years to come.”

(Note: Walton led the Warriors to a 39-4 start during the 2015-16 season as Steve Kerr recovered from back surgery, but those wins were credited to Kerr.)