Home » NBA » Who is Kara Lawson? Meet the Duke coach who reportedly is ‘prime candidate’ for Celtics job

Who is Kara Lawson? Meet the Duke coach who reportedly is ‘prime candidate’ for Celtics job 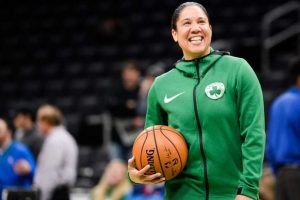 The Celtics are starting a new era ahead of the 2021 NBA offseason. Long-time GM Danny Ainge retired and coach Brad Stevens is replacing him in the front office.

That, of course, means that Boston is going to need a new coach. The job should be an attractive one considering that the team has high-end young talents including All-Stars Jayson Tatum and Jaylen Brown. As such, the team should be able to attract some of the best and brightest available coaches.

One of those options could be Kara Lawson. According to Jared Weiss of The Athletic, Lawson is a “prime candidate” to watch in the Celtics’ coaching search. The former WNBA star doesn’t have a lot of coaching experience, but she has been involved with the Boston organization and seems to have a good relationship with Brad Stevens.

But how did Lawson get to this point so quickly after her playing career came to an end? And will she have a chance to be the NBA’s first female coach? Let’s take a look.

Who is Kara Lawson?

Lawson has long been involved with professional basketball. She came into the WNBA during the 2003 WNBA Draft after a four-year college career at Tennessee. She played 13 WNBA seasons and averaged 9.5 points, 2.6 rebounds and 2.5 assists per game while playing for the Monarchs, Sun and Mystics. She also made the All-Star Game once and was an Olympic champion during her playing days.

While she was still playing, Lawson started a broadcast career and became the first woman to serve as a broadcast analyst for an NBA game. That came during a Wizards vs. Hornets game on Jan. 12, 2007. Two years after her retirement from the WNBA in 2015, she became the lead analyst on the Wizards broadcast and remained in that role before she got into coaching.

Lawson got her start with the Celtics and served as an assistant during the 2019-20 season. She developed a terrific relationship with the players on the team and as Weiss wrote, she was “missed greatly” after her departure.

And why did Lawson leave the Celtics? She got an opportunity to serve as the coach of the Duke women’s basketball team. Her first season was cut short due to the COVID-19 pandemic, but the Blue Devils posted a 3-1 record in the four games they played before opting to cancel the rest of their season.

Kara Lawson’s tenure with the Celtics

Lawson was part of a Celtics staff that posted a 43-21 record and reached the Eastern Conference Finals despite playing in “The Bubble.” She didn’t coach in The Bubble, as she had already left for Duke, but her footprint was clearly on that squad.

As mentioned, Lawson was beloved by the players and helped a lot of them to improve. Notably, she worked with Marcus Smart to help him improve his shooting ability.

“She became more than just my shooting coach, she became a longtime friend and somebody I know I can talk to if I ever need advice,” Smart said after Lawson was announced as Duke’s next coach, per NBC Sports Boston.

During Lawson’s tenure, Smart shot 34.7 percent from beyond the arc, the second-highest mark of his career, while attempting a career-high 6.6 shots from 3-point range per game.

Beyond her work with Smart, Lawson left a lasting impression on Celtics players with her ability to connect with players.

“Kara is always known for putting a smile on players’ faces,” center Robert Williams said after Lawson joined Duke, per Justin Leger of NBC Sports Boston. “She stays in your ear, even though she may not be your personal coach she always keeps asking how I’m doing and if there’s anything I need to talk about, so I feel like Duke is going to get a great head coach. We’re going to miss her. We don’t want her to go, but it’s on to bigger and better opportunities.”

Her performance, familiarity with Boston and well-regarded status among the team’s players are part of why former Celtic-turned-broadcast-analyst Brian Scalabrine thinks that Lawson may be the right woman for the job.

“I think they’re going to hire Kara Lawson,” Scalabrine said. “I know the organization thinks she’s unbelievable. I know the players respect her. When she went down to Duke to coach the women’s team there — I mean, I’m just putting A + B = C to me. I think they hire Kara Lawson. …

“She’s insanely good as a coach,” he added. “It’s not one of those things where ‘she’s good for a female.’ No, she walked into practice and she commanded practice right from the jump. She was giving people tips and people’s jaws were dropping. She’s elite at what she does. … I thought she was head coaching material within five minutes talking with her.”

Brad Stevens is ‘a mentor’ to Kara Lawson

Does Brad Stevens share Scalabrine’s opinion that Lawson is “elite” and ready to be an NBA head coach after just two years of experience? That’s what will ultimately matter during the hiring process.

Stevens made the decision to target Lawson as a member of his staff and was able to lure her out of the Wizards booth to begin her coaching career. Shortly after she came aboard, Stevens spoke well of her during her first NBA Summer League experience.

“She is as sharp as they come,” Stevens said, per KnoxNews.com. “so we’re excited to have her on board. She’s really excited to get going. … Thank goodness she’s on our staff. I think she’ll do a great, great job for us.”

Later that season on International Women’s Day (March 8) in 2020, Stevens was asked his opinion of Lawson. And he continued to speak well of his then-assistant.

“I think the world of Kara,” Stevens said. “She’s a special coach. You could always kind of see that when she was playing and you could hear it when she was calling games, but to get a chance to live it every day, she’s as good as there is. She’s really, really good.”

And even though Lawson left the team after the 2020 season, the two still keep in touch.

“He’s still a great mentor for me—I talk to him weekly,” Lawson said in a press conference last summer, per the Duke Chronicle.

It certainly seems that the two have a good relationship and Stevens thinks highly of Lawson. That should at least put her on the radar as a potential option, especially if the team is looking to bring in someone who is already familiar with the roster.

Lawson and current assistant Jay Larranaga would represent the best options if Stevens wants some continuity and chemistry at the head coach spot. That may help keep things running smoothly as he transitions into the front office.