Home » NBA » When did Usain Bolt retire? How many Olympic medals did Jamaican sprint legend win?

When did Usain Bolt retire? How many Olympic medals did Jamaican sprint legend win? 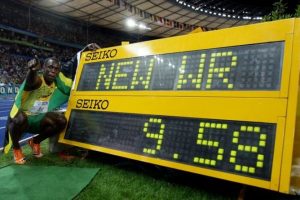 Britain’s Zharnel Hughes is through to the final with the likes of Andre de Grasse, Bingtian Su and Ronnie Baker all challenging for the medals.

But there is one noticeable absentee from the eight finalists with Bolt not running.

Bolt dominated the 100m event in his career and is regarded as the greatest sprinter of all time.

Nobody has come close to his world record time of 9.58 and he also holds the Olympic record of 9.63 which he achieved at London 2012.

When did Usain Bolt retire?

His records are unlikely to be broken at Tokyo 2020 and Bolt won’t be defending his Olympic gold medals.

Bolt became the first athlete in history to win 100m gold in three consecutive Olympics when he won at Rio 2016.

He went on to claim the ‘triple-triple’ – winning golds in the 200m and 4x100m as well, although in January 2017 he was stripped of the 4x100m relay gold in Beijing 2008 after Nesta Carter was found guilty of a doping violation.

And later that year, after the 2017 World Championships, Bolt announced his retirement from sprinting.

He sustained a serious hamstring injury during his run in the 4x100m relay, pulling up with 50m remaining.

Bolt refused a wheelchair though, crossing the line with the assistance of team-mates Omar McLeod, Julian Forte, and Yohan Blake.

How many medals did Usain Bolt win?

Despite being stripped of his Beijing 2008 gold medal in the 4x100m relay, Bolt still won an incredible eight Olympic golds in his career.

No sprinter in history has come close to match Bolt’s record at the Olympics.

But he also enjoyed great success in the World Championships, where he won an unprecedented 11 gold medals.