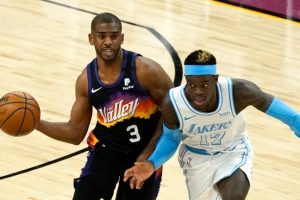 The Phoenix Suns recorded the second-best record in the NBA this season and aren’t even favourites to win a first-round playoff series. Playing LeBron James and the Los Angeles Lakers will do that.

That’s just the predicament when you draw the defending champions, who begin their pursuit of another title when they visit the Suns in Sunday’s opener of the seven-game Western Conference series.

The seventh-seeded Lakers dealt with injuries to both of their stars, James and Anthony Davis, over the second half of the season, but both players report they are fine entering this series.

That has helped fuel the popular belief that Los Angeles (42-30 regular season) is the better team than the Suns (51-21) despite needing a play-in victory over the Golden State Warriors to land a postseason berth.

“We all hear it,” Phoenix coach Monty Williams told reporters. “Ultimately you got to get out there and compete for 48 minutes, and that’s what we plan to do.

“Did anybody think we were going to win 51 games this year? In a shortened season? Don’t think so. So why would we listen to those people now?”

This also happens to be Phoenix’s first postseason trip since 2010, and sometimes the pressure can trip a team up.

The Suns are hoping the leadership of veteran point guard Chris Paul will negate that perception. But still, the Lakers certainly aren’t expecting to be ousted in the first round.

“Somebody that texted me (Thursday) was like, ‘They have you guys losing,'” Phoenix star guard Devin Booker said. “I ask them, ‘Who are they?’ That’s the approach every day.

“We have a good group in this locker room from top to bottom that’s focused on winning basketball games and that’s it.”

The Lakers seem to be rediscovering their stride as they won their final five regular-season games prior to the play-in triumph over the Warriors.

James missed 26 of 28 games due to his ankle injury but has played in three straight games without a setback.

Davis was sidelined for more than two months with a calf injury before returning April 22. He views his health as a non-issue entering the series and is more focused on seeing his team start off strong.

“Our mindset is to take Game 1 and take that home-court advantage, and it could benefit us in the end.”

James has a long-term friendship with Paul that dates back to when both players were in high school.

He sees the effect Paul has had on the Suns this season and is deeply impressed.

But even though James owns four title rings and Paul has zero, he says that’s a subject that doesn’t come up between the two.

“I think you know me by now,” James said. “I think that’s not in my (character) traits. I don’t really talk about my accolades, or what I’ve been able to do. And our friendship is beyond that.

“So I’m not one of those guys to talk about what I have. I think that’s very shallow. That’s beneath me, personally. So I don’t get involved in that.”

James scored 38 points in his lone appearance against the Suns this season when the Lakers lost 114-104 at home on March 2. Davis missed that contest.

James and Davis both were sidelined when Phoenix posted a 111-94 home win on March 21. Paul had a triple-double with 11 points, 13 assists and 10 rebounds.

Davis poured in 42 points when the Lakers registered a 123-110 home win on May 9. James sat out that contest.

Meanwhile, the Suns are hopeful center Deandre Ayton (knee) will be cleared to play. He missed the final three regular-season games.