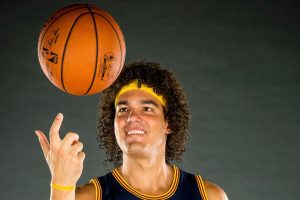 CLEVELAND — Anderson Varejao is back with the Cleveland Cavaliers, signing a 10-day contract Tuesday to begin a stint to celebrate his 12-year run with the team.

The 38-year-old center hasn’t played in the NBA since 2017 with the Golden State Warriors. The Brazilian agreed to come back and finish this season with the injury-plagued Cavaliers, who are crawling to the finish in another losing season.

Varejao was with the Cavs from 2004 to ’16 before he was traded to the Portland Trail Blazers in a three-team deal a few months before Cleveland overcame a 3-1 deficit and beat Golden State in the NBA Finals to end the city’s 52-year championship drought.

Varejao, who was waived by the Blazers after the trade, signed as a free agent with Golden State and played against the Cavaliers in the Finals, a sight that pained some in Cleveland.

Nicknamed “Wild Thing” because of his curly hair and hustle, Varejao was beloved by Cavaliers fans for his aggressive playing style as a key contributor on those LeBron James-led teams. He played 591 games for Cleveland before being traded.

“Andy embodies all that the city of Cleveland stands for and beyond, and we couldn’t be more excited to bring his experience, leadership and character back into this locker room,” general manager Koby Altman said. “His infectious work ethic and commitment to our community have earned him his rightful place in the fabric of this organization and all of Northeast Ohio, and have established a genuine admiration that resonates strongly throughout our passionate fan base.

“There are not many athletes who can impact the game of basketball the way Andy has over his career, and I feel that our players will benefit greatly from their daily interaction with him.”

Cleveland was granted a roster hardship exception from the NBA so it could sign Varejao. The team has seven players, including starting point guard Darius Garland, injured and out for Tuesday night’s game against the Phoenix Suns.

After playing two seasons with the Warriors, Varejao played for two years in Brazil. He’s been living in Cleveland.