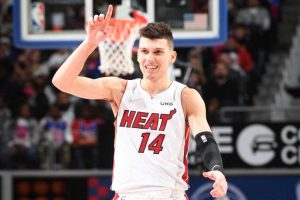 Against the 4-13 Pistons, the Heat – one of the Conference’s top teams – were down by 12 late in the third quarter in Detroit.

However, at the final buzzer, the visitors outscored the hosts by 17 and youngster Tyler Herro was a huge part of the turnaround.

The 21-year-old was responsible for 17 of the team’s 33 points in the final quarter, erupting for 14 himself.

He finished with 31 points for the game on 12-of-21 shooting from the field and 4-of-8 shooting from beyond the arc in 33 minutes off the bench. This was his second game this season of scoring 30 or more off the bench, the most in franchise history.

The youngster has been balling early on in the 2021-22 season, making a statement and bouncing back from a sub-par 2020-21 campaign.

While these numbers do put his name among the candidates for the Most Improved Player of the Year award, but he’s really running away with it in the Sixth Man of the Year race.

He’s come off the bench in 11 of the 17 games with league-leading averages of 21.0 points in 32.3 minutes. And most of his points seem to be coming when it matters the most, as he averages the third-most points in the fourth quarter and his 113 points total ranks second in the league despite being a reserve.

Thus, playing the role of a ‘spark off the bench’ to perfection.

Herro had first made a name for himself in the 2020 bubble playoffs but by those standards, he seem to fall off in the 72-game shortened 2020-21 season coming off a very short offseason break.

This time around, with a more traditional offseason, he is reminding everybody – supporters and naysayers alike – of his talent and capability.