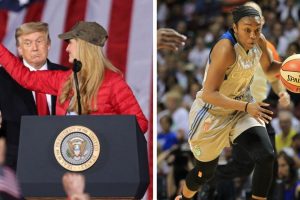 Former US senator Kelly Loeffler’s controversial stint as a WNBA team owner ended Friday as the women’s league and NBA board of governors approved the sale of the Atlanta Dream.

Montgomery becomes the first former player to become both an owner and executive of a WNBA team.

But even more interesting is that The Nation revealed that Loeffler had refused to meet with Montgomery after she took a year off to dedicate herself to social justice issues.

Asking for a meeting to discuss the concerns, Montgomery was denied and ran what was deemed “a racist senate campaign” which she ultimately lost to Reverend Raphael Warnock in Georgia.

Warnock is a Democrat and the pastor of Martin Luther King’s Atlanta church who Loeffler had once branded a “radical liberal” who threatened American values.

Montgomery was thrilled to make history as part of the ownership group, although it’s not known how much of a stake she has in the team.

“I am excited to be able to continue my basketball career as the first former WNBA player to become a team owner and member of the leadership team for the Dream,” she said to The Nation. “My moments in Atlanta are continuing to build momentum in the community and I look forward to developing relationships that are mutually beneficial to both Atlanta and the Dream.”

The divorce from Loeffler was revealed last week.

“With the unanimous WNBA and NBA votes, today marks a new beginning for the Atlanta Dream organisation and we are very pleased to welcome Larry Gottesdiener and Suzanne Abair to the WNBA,” WNBA commissioner Cathy Engelbert said.

“I admire their passion for women’s basketball, but more importantly, have been impressed with their values. I am also thrilled that former WNBA star Renee Montgomery will be joining the ownership group as an investor and executive for the team.

“Renee is a trailblazer who has made a major impact both in the game and beyond.”

Plenty were rejoicing the change in leadership of the team with NBA star LeBron James taking a shot on social media.

James has been locked in his own version of the “stick to sports’ drama with football legend Zlatan Ibrahimovic calling out athletes who use their platform for political messages.

Players around the WNBA called for called for Loeffler to sell her 49 per cent share in the Dream in July after she wrote to Engelbert to object to WNBA initiatives to support the Black Lives Matter movement and advocate for racial justice.

“The truth is, we need less – not more politics in sports,” Loeffler said.

Past and present WNBA players had already been angered by a Loeffler appearance on Fox News in which the Donald Trump supporter called armed Black protesters in Atlanta “mob rule”, though she is a vocal supporter of the right to bear arms in the United States.

Montgomery, who opted out of the 2020 season to focus her time on social justice issues, tweeted of those comments: “The second amendment is a part of the Bill of Rights. The problem some may be having is who is bearing the arms.”

Dream players actively campaigned against Loeffler during the Senate run-off election in Georgia, pointedly wearing “Vote Warnock” T-shirts before a game against Phoenix in August.