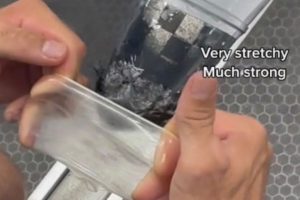 Olympic Champion Jess Fox has revealed how a condom was used to fix her damaged kayak at Tokyo 2020.

The Australian star needed to repair the nose of her kayak following her canoe slalom K1 heats and finals, where she won a bronze medal.

Frost, 27, went on to win the final canoe slalom C1 event on Thursday afternoon which became her first Olympic gold, having won silver in London and bronze in Rio previously.

But she will perhaps be best remembered for her fascinating Tik-Tok which demonstrates a member of her crew patching up her kayak with an unexpected item.

In the clip, Fox films a condom being stretched over the top of the kayak’s nose to keep a carbon mixture in place.

She captioned it: “Bet you never knew condoms could be used for kayak repairs.

“It gives the carbon a smooth finish!”

What have been your favourite stories from the Tokyo Olympics so far? Let us know in the comments section.

Fox completed the K1 course two seconds faster than her opponents but ended up third due to two two-second time penalties.

However, she more than made up for it in the C1 final by beating Team GB's Mallory Franklin by 3.64 seconds following her emergency Kayak repairs.

The link between condoms and the Olympics seems to be something of a recurring theme, with 160,000 being handed out to athletes for the games.

This is in spite a sex ban being in place during Tokyo 2020 due to concerns surrounding the spread of the coronavirus.

Approximately 450,000 of the contraceptives were also handed out at Rio in 2016 with Olympic Villages rumoured to be rife with sexual activity.