Home » NBA » The real MVP: Steph just had the best jump-shooting Finals ever

The real MVP: Steph just had the best jump-shooting Finals ever 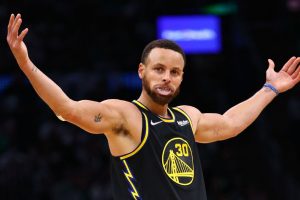 Kirk Goldsberry (@kirkgoldsberry) is a professor and an NBA analyst for ESPN.

Stephen Curry won Finals MVP honors for the first time in his career thanks in large part to a performance that ranks as his best at this stage of the season. He averaged a series-high 31.2points per game, putting the Golden State Warriors in a familiar spot: NBA champions for the fourth time in the past seven years.

Curry was clearly the single most valuable player in these Finals, even after an uncharacteristic off night in Game 5. He was the leading scorer in the series by a wide margin and his unprecedented ability to create offense off the dribble is the single biggest reason why Golden State won the series against the Boston Celtics, who had the best defense in the NBA in the regular season.

Curry is the greatest shooter in league history in part because he has developed an ability to create his own jump-shooting opportunities from distances that were rarely utilized before he showed up. He can generate shooting space against any defensive coverage in the world, and thanks to his lightning-fast release and pinpoint accuracy, he can knock down those self-created shots at elite rates.

The Curry formula is an offensive hack that has not only changed professional basketball forever, but it has also given the Warriors their most important advantage of these Finals: simple actions that lead to low-maintenance buckets from long distances.

In the quest for the 2022 NBA championship, it was less about numbers and more about this simple fact: Thanks to Curry, the Warriors had a reliable offensive scorer; the Celtics did not.