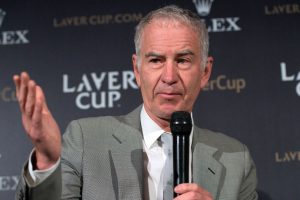 John McEnroe has been slammed for comments he made about Chinese star Jungcheng Shang.

The tennis legend was working as part of ESPN's Australian Open coverage when he made the remarks regarding Shang's nickname.

Shang, 17, who became the first Chinese male player to win a match in Melbourne, is nicknamed 'Jerry' – inspired by TV cartoon Tom and Jerry.

McEnroe referenced the cartoon and then sparked outrage among tennis fans for his comments, which many deemed disrespectful.

"How did they come up with Jerry? Is he the only guy from China named Jerry? Did his parents watch Tom and Jerry?" the American asked in footage that has emerged on social media.

Twitter user @ead220 called on McEnroe to apologise to the player, while @cosmos_lukas added: “McEnroe is probably the most annoying commentator in the game of Tennis. But this is beyond disgraceful.”

@Charisse_Tweets insisted that it wasn’t an isolated incident in the commentary box, adding: “The way they discuss the Asian players has always been so cringe and disrespectful.


“I even recall when they bring up the order of play, they refuse to say Qinwen Zheng’s name — they just kept saying “Chinese Superstar” because they didn’t want to attempt the pronunciation.”

Daily Star Sport has contacted ESPN for comment on the incident.

McEnroe is also working for Eurosport at the Australian Open and has provided analysis on matches throughout the competition to date.

Shang's Australian Open campaign ended in Melbourne in the second round as he was defeated by 16th seed Frances Tiafoe in straight sets.

On his record-breaking fear, he admitted: "I'm a little surprised that I came this fast, but at the same time, I think it's all the hard work from my team and myself that paid off.

"“I think I'm just nothing else but excited about what's coming next.”