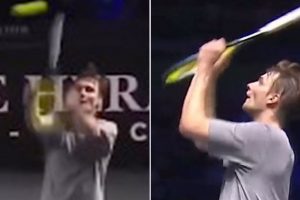 Alexander Bublik left the crowd beside themselves with rage after failing to pull off a trick shot.

The tennis ace used the handle of his racket during the final of the Moselle Open in France on Sunday against Italian opponent Lorenzo Sonego.

The Kazakhstani decided to show off with the flukey strike in an exchange – though Sonego went on to win the point and the showdown 7-6 6-2, clinching the title.

Indeed, the piece of flamboyancy did not go down well with some of those at home.

One scathed in a reply to the video which was uploaded to Instagram: “These clowns are ruining the game! Nick Kyrgios included!"

One said: “What was he thinking? He should've gone down the line!” Another stated: “It’s a final of an official ATP event where everything was at stake and this is a break point. I’m one of those who I mostly enjoys Kygrios’ antics but this isn’t enjoyable in any way.”

Do you think it was a disrespectful shotLet us know in the comments section.

But someone had a bit of an opposing view: “Lots of people don't like this guy, but he is one among others who doesn't forget that tennis is a game.”

At the time, Bublik, who is world No44, was on a break point at 3-1 down in the second set – and after Sonego hit back a return, giving him an easy chance to seal the win, he gripped his racket frame and whacked the ball back over the net.

Sonego was there to hit it back, before the Kazakhstani smashed the ball into the net, leaving the crowd and those at home both frustrated and in disbelief.

The whole exchange put Sonego 4-1 ahead in the second set and he then went on to claim the win and the trophy.