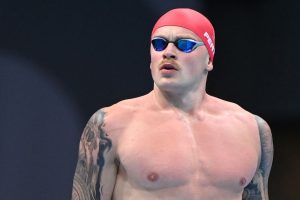 Team GB gold medalist Adam Peaty has hit back at critics online after announcing that he was going to take a short break following the 2020 Tokyo Olympics.

The swimming champion let his feelings known on Twitter after many negative comments were left on an article which slammed mental health, highlighting the stigma around the sensitive subject.

After a five-year wait, Peaty defended his 100-metre breaststroke crown, and was part of Team GB's winning mixed 4x100m medley relay side that set a new world record in the event.

Peaty will return to the UK this week, but has been criticised for planning to take a month out to recharge and protect his mental health.

After many negative comments were left following an article with msn.com, Peaty responded saying: "Reading some of the comments in response to this is why we have such a stigma around mental wellbeing in sport.

'It isn’t a normal job. There is a huge amount of pressure. Money does not buy happiness."

The Olympic champion then justified his decision further: "I’m taking a break because I’ve been going extremely hard for as long as I can remember. I’ve averaged 2 weeks off a year for the last 7 years."

Should more be done to protect the wellbeing of athletes? Let us know in the comments below

Peaty's final comment was: "Unfortunately there are people out there who think they know you more than you know yourself."

He is expected to miss the International Swimming League (ISL), which begins in September, to prioritise a mental and physical break before the World and European Championships, as well as the Commonwealth Games in 2022.

His response comes in the wake of criticism aimed at US gymnast Simone Biles, 24, who withdrew from several events at the Games citing mental health issues.

Biles recorded her lowest score in the opening vault before pulling out of the team final entirely last week, though did return to the arena to cheer on her teammates.

She said: "After the performance I did, I just didn't want to go on. I have to focus on my mental health. I just think mental health is more prevalent in sports right now.

"We have to protect our minds and our bodies and not just go out and do what the world wants us to do."