Home » NBA » Taking a halftime look at the good, the bad and the ugly of the NBA season

Taking a halftime look at the good, the bad and the ugly of the NBA season 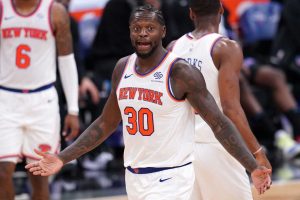 Some fans at games.

Stringent health and safety protocols for players, coaches and staff.

A December start. An All-Star game in March.

At the midpoint of the NBA season, it’s usually the appropriate time to offer evaluations. Who is playing well? Who is not? Unlike in previous years, the analysis this season goes beyond a team’s success or shortcomings.

With the COVID-19 still altering our lives, the critiques have to keep in mind the strangeness of the season.

USA TODAY NBA writers Jeff Zillgitt and Mark Medina offer a first-half season in review on matters both on and off the court.

First-time All-Star Julius Randle has the Knicks in a position to earn their first playoff berth since 2013. (Photo: Cary Edmondson, USA TODAY Sports)

Even when the New York Knicks brought in promising coaches and players, they still remained dysfunctional because of owner James Dolan, injuries and awkward rosters. This season, the Knicks appear on pace toward securing one of the Eastern Conference’s low playoff seeds. The reason? Julius Randle has become an All-Star. Obi Toppin has emerged as a promising young player. And new coach Tom Thibodeau has maximized the young talent he has, especially defensively, showing it is possible for NBA teams both to develop and win at the same time.

After pairing veteran Chris Paul (3) with emerging young talent Devin Booker, the Suns have ascended to the No. 2 seed in the Western Conference. (Photo: Ron Chenoy, USA TODAY Sports)

No one should be surprised the Phoenix Suns are a playoff contender. They went 8-0 in the NBA bubble. They have emerging young talent in Devin Booker and Deandre Ayton. And they acquired Chris Paul in the offseason. But most NBA evaluators tabbed the Suns between a No. 8 and No. 10 seed in the Western Conference. Instead, the Suns have the second best record in the Western Conference (24-11). The Los Angeles Lakers and LA Clippers still have more star power and depth than the Suns, and would be favored in a playoff series. But expect the Suns to advance past the first round and at least become a speedbump toward one of the other West’s powerhouse. If any of those teams are not fully healthy or let their guard down, the Suns will pounce and eliminate them.

Even though Jayson Tatum (0) has reached All-Star status again, the Celtics are just 19-17 at the midway point of the season. (Photo: Joe Camporeale, USA TODAY Sports)

The Boston Celtics have two All-Stars in Jaylen Brown and Jayson Tatum and another in Kemba Walker who was an All-Star last season. Yet, the Celtics are floating around .500 at 19-17 and struggling on the road at 7-12 and 3-4 in the Atlantic Division. The Celtics should be better. While they are 11th offensively and 15th defensively, the Celtics are 28th in net efficiency rating in the fourth quarter, struggling on both ends in the final 12 minutes. In clutch games – defined as games within five points in the final five minutes – the Celtics are 10-13 and struggle to score in those close games, shooting 41% from the field and 25.9% on 3-pointers.

LeBron James' Lakers and Bam Adebayo's Heat met earlier this season as well as in the NBA Finals last year. But both teams have struggled this season. (Photo: The Associated Press)

What’s going on with the conference champions

The Lakers had been atop the Western Conference standings with Utah but began to slide when Anthony Davis sustained a strained calf. The Lakers have lost seven of their past 10 games and are in third place in the Western Conference, 3 1/2 games behind the Jazz and just one game behind Phoenix for second place. They still have the No. 1 defense in the league, and LeBron James continues to play at an MVP level. As long as Davis returns and stays in the lineup, the Lakers will be fine.

The Heat are in a more precarious situation – the result of COVID-19 protocols. The Heat are slowly climbing the standings. They are 18-18 and in sixth place the East – not exactly where the defending Eastern Conference champions expected to be at the All-Star break. They started 6-12 (13th place) and 11-17 (11th place), and Jimmy Butler has played in just 22 games. But the Heat have won 11 of their last 15 and are playing like the kind of team that reached the NBA Finals last season. They need Butler on the court. He averages 20.5 points, 7.5 rebounds and 7.8 assists, and Miami is a better team offensively and defensively with his presence.

How has COVID-19 impacted the season?

The NBA postponed 31 games in the first half of the season due to COVID-19 health and safety protocols. The Washington Wizards and Memphis Grizzlies each had six games postponed, the Spurs five, the Chicago Bulls and Charlotte Hornets four and the Phoenix Suns, Boston Celtics and Portland Trail Blazers three.

The league postponed 22 games in the last week of December and all of January but just nine games in February and first week of March. In January, the NBA tightened its health and safety protocols, and it has helped reduce postponed games.

Don't be surprised if NBA commissioner Adam Silver on Saturday in his midseason press conference stresses that players remain diligent and adhere to protocols so the league can finish the season with few hurdles.