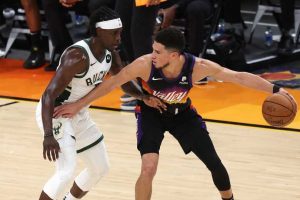 Suns star Chris Paul said it best ahead of his team’s Game 6 matchup against the Bucks: “We got to come out, be ready to play and it’s either win or go home.”

Phoenix enters Tuesday night’s contest on the brink of elimination after dropping three consecutive NBA Finals games. The Suns have not lost confidence, though, and believe they can force a Game 7.

“Something that coach [Monty Williams] and everybody has been saying: If you went to the beginning of the season and said we had a chance to be where we are right now, would you take it? Absolutely. Absolutely,” Paul said during his Monday media availability. “And we get a chance to determine the outcome. It’s not like the game is going to be simulated or somebody else got to play. We get a chance. We control our own destiny. So I think that’s the exciting part about it.”

Over in Milwaukee’s locker room, the challenge is staying in the moment. The Bucks have all the momentum on their side, but the job isn’t done just yet.

“I can’t focus on celebrating. I can’t focus on that right now because I feel like you get too ahead of yourself,” Bucks star Giannis Antetokounmpo said on Monday. “We got to focus. I got to focus right now, and then when the game comes tomorrow, focus on each possession at a time, a possession at a time. As I said, play good basketball, compete as hard as possible and put ourselves in a position to be able to win that game. That’s all you can ask for.”

Will the Bucks capture their first NBA championship in 50 years? Or will the Suns find a way to stay alive?

Sporting News is tracking live scoring updates and highlights from Suns vs. Bucks in the 2021 NBA Finals. Follow along here for complete results from Game 6 on Tuesday night.

9:35 p.m. — Oh, what a beautiful spin move by Giannis Antetokounmpo.

9:15 p.m. — Giannis Antetokounmpo gets the job done on both ends of the floor.

Game 6 of the NBA Finals will tip off at 9 p.m. ET. The series will shift from Milwaukee back to Phoenix for Game 7 if necessary.

Bucks vs. Suns will be broadcast live on ABC. You can live-stream Game 6 via Watch ESPN or the Watch ESPN app.

The game can also be streamed on fuboTV, which offers a 7-day free trial.