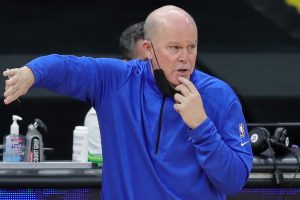 The Orlando Magic are the NBA third team with an opening for a head coach, joining Portland and Boston.

The Magic and Steve Clifford have agreed to part ways, the team announced in a statement Saturday.

"We appreciate the many sacrifices he has made as our head coach and understand the timeline of our new path does not align with his goals as a head coach in our league," Magic president of basketball operations Jeff Weltman said in a statement.

Clifford spent three seasons with the Magic, guiding them to the playoffs in 2019 and 2020. He was 96-131 with Orlando, including 21-51 this season in which injuries and COVID-19 health and safety protocols hampered progress.

Before the trade deadline, the Magic dealt Nik Vucevic to Chicago, Evan Fournier to Boston and Aaron Gordon to Denver in exchange for first-round picks in 2021, 2023 and 2025. It was a clear signal the Magic entered a rebuild.

Clifford and the Magic missed the postseason this year after losing in the first round the two seasons prior. (Photo: Sergio Estrada, USA TODAY Sports)

"It’s been an honor and privilege to coach this team in this community," Clifford said Saturday.

Clifford, 59, is a respected coach throughout the league. He has dealt with health issues over the years and missed time this season after he tested positive for COVID-19. Before Orlando, he coached Charlotte for five seasons.