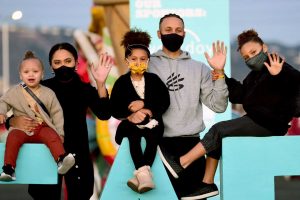 After learning many families in Oakland, California, have dealt with food insecurities since the beginning of the pandemic, Golden State Warriors star Stephen Curry and his wife, Ayesha, got to work to addressing the issue.

Their foundation, Eat. Learn. Play. was launched in July 2019, with the mission to, "end childhood hunger, ensuring students have access to a quality education, and providing safe places for all children to play and be active."

Now one year later, the foundation has served 16 million meals to families in Oakland, according to the San Francisco Chronicle.

"We’ve been able to mobilize quickly. We didn’t expect to have such an impact — we only launched a year and a half ago. But so many kids were hanging in the dark. It was alarming," Stephen Curry said. “We are excited about the work we’re doing but it’s hard to celebrate because it means the need is so great. That’s the dichotomy.”