Stephen Curry just shrugged and grinned as he kept lighting up the floor, scoring 51 points and finishing with 11 3-pointers in only three quarters of the Golden State Warriors’ 144-122 victory over the Washington Wizards on Wednesday night.

Kevin Durant added 30 points, eight rebounds and seven assists, and Draymond Green made 11 of his 12 assists in the first half to help the two-time defending champions finish with 37 after dishing out 35 assists in a 20-point victory against Phoenix on Monday.

But this was all Curry’s show. He knocked down his 11th 3 of the night late in the third from 32 feet back and shrugged like no big deal whatsoever. 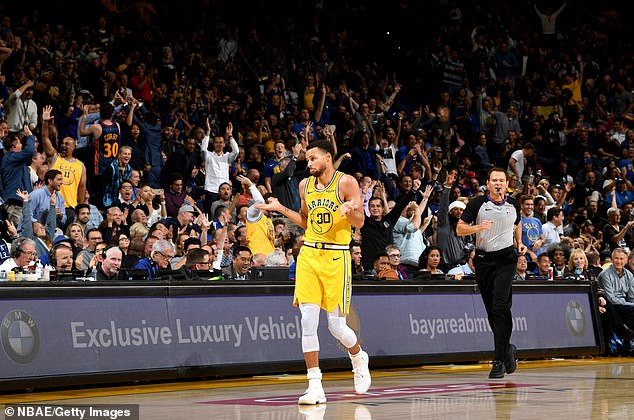 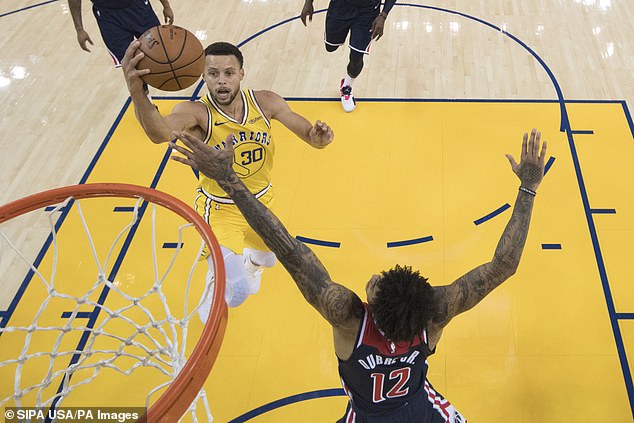 He scored 31 in the first half and finished with his sixth career 50-point game and made 10 or more 3s for the 10th time. The 51 points matched his most at Oracle Arena.

Curry hit his first five 3-pointers then after his fifth one drove to the basket and was fouled. He made two free throws to chants of ‘MVP! MVP!’ The two-time winner of the award had the ninth 30-point half of his career and fourth at home.

He has scored 30 or more points in four of the first five games and had 29 on Monday against Phoenix, also playing just three quarters. He has hit at least five 3-pointers in each game so far.

Bradley Beal bruised his sternum early then returned late in the first half and wound up with 23 points. Kelly Oubre Jr. scored 17 points off the bench for Washington.

The Warriors have won four straight against Washington. 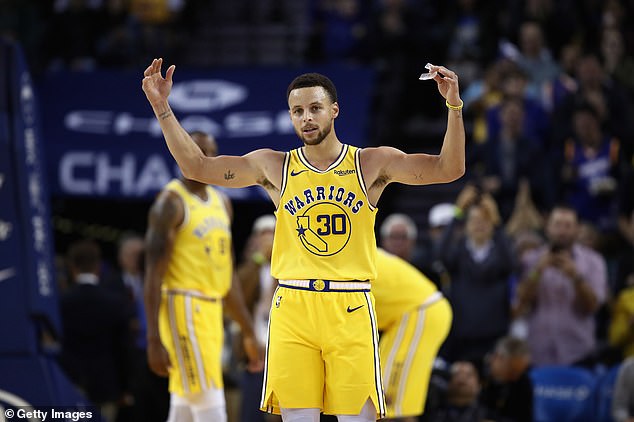 Wizards: C Ian Mahinmi missed the game with back spasms, Jason Smith starting in his place. Washington haven’t won at Golden State since Jan. 28, 2014, a five-game skid. The Wizards have dropped 10 of 12 on the Warriors’ home floor.

Warriors: Golden State had their first 80-point half since scoring 81 in the first half Jan. 13 at Toronto.

He notched the 22nd 20-point quarter of his career and seventh in the opening period.

This marked Golden State’s initial matchup against the Eastern Conference so far and first of four straight with an upcoming three-game road trip to New York, Brooklyn and Chicago. The Warriors went 24-6 vs. the East last season, 11-4 at home.

The Warriors honoured the 1975 championship team, which swept the Washington Bullets 4-0 in the finals that year. Five members of the team attended morning shoot-around then Hall of Famer Rick Barry joined the group for the game.

Six players and assistant coach Joe Roberts took turns hoisting the trophy during a ceremony before the second quarter. Coach Al Attles wasn’t in attendance as originally planned because he wasn’t feeling well.

Klay Thompson missed his first three 3-point tries before connecting with 6:36 left in the third and scored 19 points.

Thompson is 4 for 27 from long range through the initial five games.

‘One thing I love about Klay is he’s going to shoot his way out of anything,’ coach Steve Kerr said.

Wizards forward Markieff Morris was fined $15,000 by the NBA for unsportsmanlike conduct.

Morris was on the bench when he twice pulled at guard Seth Curry’s shorts during live play at the end of the fourth quarter in the Wizards’ 125-124 overtime victory.