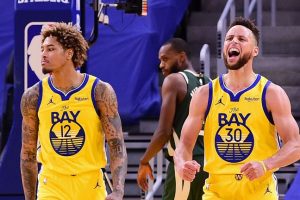 Stephen Curry scored 41 points, including 30 in the second half, and the Golden State Warriors found the energetic effort they were looking for, rallying late for a 122-121 victory Tuesday over the Milwaukee Bucks in San Francisco.

Kelly Oubre Jr. had 19 points and Kent Bazemore added 18 as the Warriors ended a three-game losing streak in the opener of a stretch of four home games. Oubre gave the Warriors the lead on two free throws with 7.7 seconds remaining.

Golden State had lost seven of its previous eight games and is clinging to the No. 10 spot in the Western Conference, the last spot to be eligible for the play-in tournament for the postseason.

James Wiseman had 13 points and 10 rebounds for Golden State, which rallied from a 13-point deficit in the third quarter and multiple 10-point deficits in the fourth quarter. The Warriors trailed 116-106 with four minutes remaining before going on their late rally.

Recently released by the Houston Rockets, the Clippers signed versatile big man DeMarcus Cousins to a 10-day contract, giving L.A. some size up front with Serge Ibaka still nursing a lower back injury. Cousins finished with seven points and four rebounds on his debut.

However, the Clippers did a good job defensively of keeping Damian Lillard from getting to the basket. Lillard shot just 2 for 14 from the field and finished with just 11 points.

Joel Embiid returned to the Philadelphia 76ers’ line-up on Tuesday night and finished with 35 points and six rebounds to lead them to a 106-96 victory over the Celtics in Boston.

The Sixers swept the three-game season series with the victory and have won seven of their past eight meetings with the Celtics.

Embiid, who sat out Philadelphia’s Sunday loss to Memphis, played for the second time in the team’s past three games after sitting out the previous 10 due to a bone bruise in his left knee.

Jayson Tatum was held scoreless in the first quarter but finished with 20 points, four rebounds and four assists to lead the Celtics.

Embiid played just under 33 minutes and continued to dominate the Celtics, as he is averaging 38.3 points and nine rebounds in their three meetings this season.

The Hawks were 20-for-31 for a season-high 64.5 percent on 3-pointers, including an NBA-record 11-for-11 from distance in the third quarter. Atlanta began the night ranked last in the league in 3-point shooting (33.3 percent).

The @ATLHawks set a new NBA record for threes made in a quarter without a miss, going 11 for 11 in the 3rd quarter tonight! pic.twitter.com/n4a6ZfZ5TN

They fell short of the franchise record of 70.6 percent of 3-pointers set in 1996 against Dallas.

The win gave Atlanta a sweep of the two-game season series against the Pelicans.

New Orleans got Zion Williamson back in the line-up after he missed three games with a sprained right thumb. He scored 34 and extended his streak of 20-plus point games to 25 straight.

The Pelicans got 14 points from Eric Bledsoe and 12 points and 11 assists from Lonzo Ball.

Nikola Jokic scored 27 points on 13-of-16 shooting from the floor and dished out 11 assists to lead the Denver Nuggets to their sixth straight win, a 134-119 rout of the visiting Detroit Pistons.

Denver remained one of the NBA’s hottest teams, earning its 15th victory in the past 18 games.

Michael Porter Jr. and Will Barton scored 25 and 24 points, respectively, for Denver. Paul Millsap added 12 points, and Monte Morris chipped in 10 points. Jokic grabbed eight rebounds and Porter had seven to contribute to the Nuggets’ 44-30 advantage on the glass. Barton pulled in six rebounds, handed out four assists and made two steals.

Jerami Grant led Detroit in his return to Denver, where he played in the 2019-20 season, posting 29 points, five rebounds and four assists. Saddiq Bey, who finished with 25 points, shot 6 of 12 from 3-point range to lead Detroit’s 15-of-35 shooting from outside.

Nikola Vucevic had his most productive game since joining Chicago on Tuesday night, contributing 32 points and 17 rebounds in the Bulls’ 113-97 road win over the injury-riddled Indiana Pacers.

Zach LaVine chipped in with 19 points for the Bulls, who were opening a five-game trip.

Caris LeVert had a team-high 20 points for the Pacers, who began the night without Domantas Sabonis (sprained ankle) and Malcolm Brogdon (strained hip) and ended it without Myles Turner, who suffered a sprained ankle in the third quarter.

Lauri Markkanen added 15 points, Thaddeus Young 14, White 13 and Williams 10 for Chicago, which had lost six in a row before beating Brooklyn 115-107 on Sunday.

The Memphis Grizzlies snapped yet another Miami Heat winning streak on Tuesday night as Dillon Brooks had a season-high 28 points and six scored in double-figures in a 124-112 victory at American Airlines Arena in Miami.

The Heat had a five-game winning streak stopped in Memphis last month and came into the contest winners of its past four. This one was not as close, as Memphis held a lead on the Heat for much of the night and really opened things up in the fourth.

The Heat were led by Bam Adebayo, who ended with a triple-double with 18 points, 10 rebounds and 10 assists. Jimmy Butler led Miami in scoring with 28 points.

Markieff Morris added 15 points and grabbed nine rebounds for the Lakers, who had lost their 11 previous games with the Raptors.

The Lakers opened up a 34-point lead in the second quarter in a game between two teams depleted by injuries and the ejections of OG Anunoby and Montrezl Harrell after a scuffle late in the first quarter.

Anunoby was fouled by Schroder as he went up for a layup. Schroder was holding Anunoby to prevent him from falling. Anunoby slammed Schroder to the court. Harrell then became involved.

Former Raptor Marc Gasol scored nine of his 13 points in the first quarter and had nine rebounds, five assists and four blocks for the Lakers. Kentavious Caldwell-Pope and Alex Caruso each had 13 points, Dennis Schroder had 12 points and nine assists and Devontae Cacok scored 10 and eight rebounds.