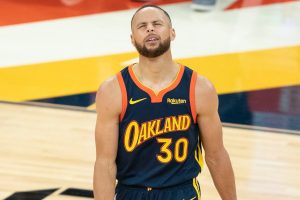 The immediate past left the Golden State Warriors expressing frustration.

They had just experienced a 117-112 overtime loss to the Memphis Grizzlies in the play-in elimination game on Friday at Chase Center, dashing their hopes of making the NBA playoffs.

The Warriors have missed the postseason two consecutive seasons after spending half of the last decade winning three championships in five NBA Finals appearances.

And yet, the future also leaves them feeling optimistic.

Steph explains his emotions after the end of the Dubs’ season pic.twitter.com/TXbWJ6SLn0

Life could become easier next season considering the Warriors expect Klay Thompson to return from two consecutive season-ending injuries — ACL in his left knee (2019-20) and right Achilles tendon (2019-20). Life could also become easier next season for second-year center James Wiseman, who is expected to return from a right knee injury that sidelined him since last month. He could face less pressure given the Warriors’ revamped roster.

In addition, the Warriors will have a No. 17 draft pick and a top-three protected pick from the Minnesota Timberwolves, who finished with the league’s sixth-worst record (23-49).

And of course, there's Steph Curry.

He became a regular-season MVP candidate after finishing with his second league scoring title, leading the NBA for most 3-pointers and galvanizing a roster so well that Green said it was "the most impressive thing I’ve seen from (Curry)" in his career. Green became a Defensive Player of the Year candidate,  helped Curry get open looks with screens and passes, and led a group that was the league’s best defense in the last month.

"It’s exciting," Warriors coach Steve Kerr said. "We’re going to have some guys come back who are so much further along than we were in training camp this year. So our depth is going to improve. We’ve got some assets with possibly a couple of first-round picks and some great, great veteran players like Steph, Draymond and obviously Klay coming back will change a lot about our team. So very exciting. We got a lot of work to do this summer. But we’re all excited about it."

“You don’t want to see us next year.” pic.twitter.com/19vorqxMG5

The Warriors rectified finishing last season with the NBA’s worst record amid key departures (Kevin Durant, Andre Iguodala), key injuries (Curry, Thompson) and young players. Nonetheless, the Warriors (39-33) hovered around .500 for most of the season for a reason.

Outside of Curry’s offensive brilliance and Green’s defensive intensity, the Warriors never knew what they would get on a game-to-game basis. Hence, the Warriors could have made the playoffs if they hadn’t fallen apart in the final moments of their play-in games against the Lakers and Grizzlies

The Warriors liked Andrew Wiggins' defensive consistency and emergence as a dependable complementary scorer, but they have accepted he will never become a franchise cornerstone. The Warriors touted second-year guard Jordan Poole for his season-long growth because of his work ethic and confidence, but he still committed a key turnover in the final minute of Friday’s loss to the Grizzlies.

The Warriors have committed a long-term deal to Juan Toscano-Anderson for his hustle and positional versatility, but they will probably lose Kelly Oubre Jr. as a free agent this summer. The Warriors benefitted from Kevon Looney becoming healthy and dependable, but could not say the same thing about Eric Paschall. Warriors guard Kent Bazemore occasionally made outside shots and energy plays, but he also took erratic shots and made questionable decisions.

Stephen Curry and the Warriors will miss the playoffs for the second straight year. (Photo: Kyle Terada, USA TODAY Sports)

Kerr spent all season tinkering with rotations both to find the right combinations and avoid having Curry burn out. But Kerr eventually narrowed in on an eight-man rotation that left players admittedly feeling fatigued.

"We made a lot of strides this year, and I’m really, really excited about what’s next for this group," Kerr said. "But for now, really disappointed they’re not going to get the chance to play in the playoffs. It would’ve been a lot of fun."

Draymond says he expects to be “extremely involved” in the roster conversations during the offseason pic.twitter.com/anCxmhnS35

The Warriors’ front office, coaching staff, Curry, Thompson and Green plan to have those conversations at some point. Whenever that happens, expect the Warriors to prioritize finding the right players that can both complement Curry and ease his burden. Curry spent all season navigating countless defenders and schemes that hoped to stop him. Most of the time, Curry found shooting the ball as the best solution over finding an open teammate.

"It kept me sharp. I played well. Every game, knowing you’re going to get the kitchen sink at you, it’s fun," Curry said. "It’s exhausting. But it’s fun. It’s a challenge every night of how you’ll get yours while opening up space for other guys and finding your rhythm offensively. I don’t think I put on a run like that with this much attention in my career. So it was a really rewarding experience."

It wasn’t always a winning experience, though.

"That should work into your favor if they want to defend like that in the course of the season, especially in the playoffs. I wish we had the opportunity to show that in a series," Curry said. "But if I’m in the position that I’m playing the way I did this year, it might not look the same numbers-wise. But getting that attention, of course we can win that way with the right roster. So we’ll address that in the offseason."

For now, the Warriors will grudgingly accept they are not a part of the postseason picture once again after becoming used to being prominently displayed.