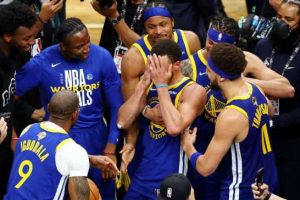 The Golden State Warriors have climbed the mountain once again, securing this year’s NBA championship after beating the Boston Celtics 103-90 in Game 6 to win the series 4-2.

After falling behind 14-2 early in the first quarter, the Warriors went on a 21-0 run, the longest scoring run in a Finals game over the past 50 years, per Elias Sports Bureau. The Warriors entered the second half with a 15-point lead and never looked back. Stephen Curry led Golden State with 34 points, 7 rebounds and 7 assists.

The Warriors captured their fourth title in eight seasons, the first team to achieve that feat since the Michael Jordan-era Chicago Bulls (1991 to ’98), according to ESPN Stats & Information research. Curry was named Finals MVP, an honor that eluded him in previous trips to the championship round. He averaged 31.2 points, 6 rebounds and 5 assists while shooting 44% from 3-point range in the series. He joins Jordan, Magic Johnson, LeBron James and Kareem Abdul-Jabbar as the only players with four rings, multiple league MVPs and a Finals MVP.