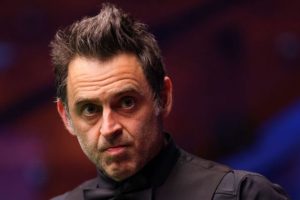 Ronnie O’Sullivan was sensationally knocked out of the Masters on Thursday afternoon as he lost to Australian Neil Robertson. The seven-time champion struggled to keep pace with his rival as he was eventually beaten 6-4 in the quarter-final encounter.

And O’Sullivan was furious with himself after losing cue ball position as he potted a red to move within touching distance of levelling the match at 4-4.

The Rocket grimaced as he walked around the table following his shot and was noticeably angry with himself.

“Shocking,” he muttered under his breath as he analysed his options, before potting the pink.

O’Sullivan eventually won the frame but lost the next two as Robertson came out on top.

Robertson will now face either John Higgins or Mark Williams in the last four, with the British duo set to go head-to-head on Thursday evening.

But following his defeat, O’Sullivan admitted he wasn’t too disappointed with the result.

“I just tried to make as much of it as I could,” O’Sullivan said. “I tried to hang in there, do what I could.

“And I think that’s the best I could have got out of today. So I’m not too disappointed – that’s the way it goes sometimes.

“When you kind of set yourself out to have a certain mentality towards something you can’t start changing your mind halfway through it.

“I’ve decided how I want to feel about how any of my games go so I’m probably not as disappointed as I would have been years ago or probably as most players would be on the circuit.

“I play for different reasons and I enjoy it. I enjoyed being out there today. It’s just a shame I couldn’t find a good enough game which would have deserved to win.”

Robertson’s victory ensured the player exacted revenge after he lost to O’Sullivan in the final of the World Grand Prix in Coventry before Christmas.

And the 39-year-old will now be hoping to advance to the final for a chance to win the second Masters title of his career.

The ace won his first Masters in 2012 as he saw off Englishman Shaun Murphy 10-6 in the showpiece event.

He lost to Mark Selby in the final a year later before losing his second final against Murphy in 2015.

Following the conclusion of Thursday’s matches, there are two more quarter-finals scheduled for Friday, with Judd Trump taking on Kyren Wilson, before Barry Hawkins plays Selby.