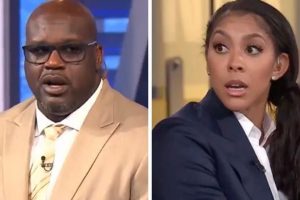 Parker dropped some seriously impressive basketball knowledge on the 48-year-old, painfully exposing just how out of touch the NBA champion is with the NBA in 2021.

Shaq remains one of the most popular commentators in basketball in his comedy act with fellow NBA legend Charles Barkley — but, for the purists, he is increasingly an eye-rolling figure with some expert analysis missing the mark.

It was all put on show during a national TV broadcast this week on TNT’s Inside the NBA where Parker took the “The Diesel” to school on how modern defensive structures work in the NBA.

She left O’Neal in a body bag by the time her explanation was done.

Candace Parker is every woman incredulous that she has to explain this shit to a man getting paid more than her pic.twitter.com/KwU3MULVl3

Parker, a co-host on the show, first explained how teams have been able to exploit the recent trend of teams switching defensive assignments, responding to screens and offensive movements designed to create mismatches.

When Shaq tried to argue that teams need to “man up” and stick to their defensive assignments rather than switching who they are guarding, Parker took time to patiently explain how professional basketball works in 2021.

Here is the most brutal part of the exchange.

Is this pork chop serious?Source:Twitter

CP: Because everybody can shoot threes.

SO: Whatever happened to man up?

CP: Because you’re going to be manning up trying to recover back to your man and they’re going to hit a three just like (Denver Nuggets star Nikola) Jokic did.

SO: Well, whatever happened to pre-rotating?”

CP: Then they moved the ball around.

It continued for several minutes with Parker left with a stunned expression on her face, with several awkward pauses after some of Shaq’s simpleton responses.

Part 2 of Candace Parker putting Shaq in a bodybag. This time with math. https://t.co/2EZ3gvqjNgpic.twitter.com/emmI4GFP9I

“If you have four to five three-point shooters on the court, you’re not going to rotate enough times,” Wade said.

It is just one of many incidents that have dented Shaq’s reputation as an analyst in recent weeks.

He was on Tuesday busted sleeping and snoring loudly by his co-hosts during a game they were about to provide expert analysis of.

He was also lasted by NBA commentators in January for a cringe-worthy post-game interview with Donovan Mitchell where he told the Jazz star he wasn’t capable of going to the next level in his career – to his face.

“I said tonight that you are one of my favourite players but you don’t have what it takes to get to the next level,” he started. “I said it on purpose because I wanted you to hear it. What do you have to say about that?”

Mitchell appeared to be somewhat taken aback about the conversation.

“Aight … that’s it.” he responded before expanding. “I’ve been hearing that since my rookie season. I’m just going to keep doing what I do.”

Shaq responded: “That’s what I wanted to hear you say, love your game brother, keep it up.”

All in a day’s work for The Diesel.