Home » NBA » Scott Brooks, Wizards rip fan who ran on court during game vs. 76ers: ‘Your thinking is barbaric’

Scott Brooks, Wizards rip fan who ran on court during game vs. 76ers: ‘Your thinking is barbaric’ 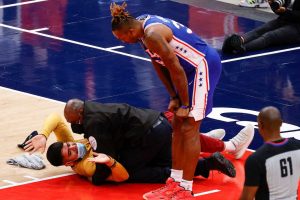 For yet another night, an NBA fan made waves at a game for poor in-arena behavior.

This time, it wasn’t directed at a specific player. Instead, a fan ran onto the court Monday during the Wizards’ win over the 76ers.

The incident, which occurred with about three minutes left in the third quarter, didn’t last long. The Washington fan barely got onto the court before security tackled him and the referees stopped the game while he was escorted off the floor in handcuffs. Thankfully, he didn’t get near any Wizards players.

Shams Charania of The Athletic reported that the fan has been banned from the Capital One Arena and the D.C. police are pursuing charges.

This incident continues a rash of poor fan behavior at NBA games during the past week. That has included:

And the latest is this Wizards fan. Needless to say, the Washington players and coaches were not happy with this misbehavior, and Wizards coach Scott Brooks ripped into a subset of fans that he told to “stay home.”

“But it’s unfortunate one fan here and there, it ruins it for everyone,” Brooks said, per USA Today. “There’s great fans in Boston and New York and Philly and D.C., Utah. But there’s some that just need to, you know what, stay home. Your thinking is barbaric. Stay home. We don’t need you. We don’t need your dollars. Just stay home. Get away from us.”

And Brooks hopes that there will be legal action against the fans who have disrupted play and harassed players, as he’s not confident the arena ban will do enough to detract this type of behavior.

“They have no fear,” Wizards coach Scott Brooks said, per ESPN. “I don’t know the law. But I just know you shouldn’t be able to do that and get away with it and just be kicked out because we all know you can dress different and look different and get into an arena.”

Wizards star Russell Westbrook echoed the sentiments of his coach and spoke of how seriously he and his teammates take the game.

“This is not a game or some s— you can just do whatever you want to do and run around,” Westbrook said. “This is our job, and we take our job very seriously.”

We’ll soon see what comes of this incident with the venue pressing charges against the fans. Between that and the assault charges pending against the Boston fan who threw a water bottle at Irving, those will hopefully serve as cautionary tales to help curb fan misbehavior.

But as Bradley Beal said, it’s time for all this nonsense to end.

“There’s no place in the game for it.”