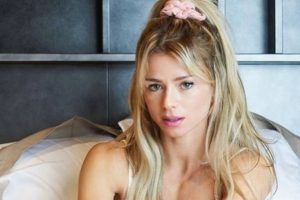 Defending Canadian Open champion Camilla Giorgi got the better of Emma Raducanu in straight-sets this week – and the Italian isn't just a bombshell on the tennis court.

The 30-year-old star who has banked more than £5million in prize money from the sport has done rather well from other ventures including modelling underwear and other fashion.

Giorgi has brought in 635,000 followers on Instagram with her latest lingerie snaps bringing in 60,000 likes – having not posted a tennis snap since last November.

READ MORE:British tennis star Heather Watson soaks up sun in bikini as she recovers from Wimbledon

Amid her tennis success, which includes the aforementioned Canadian Open and a Wimbledon quarter-final, Giorgi has hit the headlines for her French Open rule-breaking.

Having secured convincing wins over hang Shuai and Yulia Putintseva earlier this year, she was pulled to one side and asked to change her dress due to the size of an De'Longhi advertising logo.

She hit back by saying: "I don't have any change, this is my only dress. I played with it before."

Will you be watching Giorgi in action going forward? Tell us in the comments section below.

Fast-forward to August, Giorgi cruised into the round of 32 at 2022 National Bank Open as she looks to retain the only WTA 1000 final victory of her career so far.

She said: "I think it was a really good match, to be honest. I just need to get better at dealing with players who play as quick as she does."

Before her visit to Wimbledon earlier this year, in which she stumbled at the first round stage, 20-ranked Giorgi said that she dreams of climbing into the top 10.

She said: "I don't want to stop, my dream is to enter the Top Ten of the circuit. I feel fit and have great, really positive sensations.

"Tennis is a sport where you have to be present on the court. On the court, you must always be attentive and train concentration."