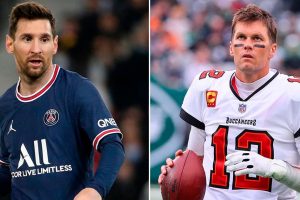 Lionel Messi and NFL legend Tom Brady have stunningly been excluded from Piers Morgan’s list of the top 10 sporting GOATs.

The Paris Saint-Germain star is widely regarded as the greatest footballer ever and recently won a record-extending seventh Ballon d’Or to back his claim.

Messi, 34, has won a remarkable 35 trophies throughout his club career with Barcelona, including 10 La Liga titles and four Champions League winners’ medals.

And although the Argentine broke his duck of international trophies last summer by securing a Copa America victory, the ever-controversial Morgan still snubbed the little magician in favour of rival Cristiano Ronaldo. Morgan enjoys a personal friendship with Manchester United forward Ronaldo, who he included in a top 10 list of legendary athletes in his column for The Daily Mail.

The 56-year-old conceded that the likes of Messi, Pele and Diego Maradona were worth a shout for football’s GOAT, before stating Ronaldo is “above them all.”

Morgan went on to add that the Portugal captain and five-time Champions League winner is the “best real footballer to ever lace his boots.”

Brady won a record-breaking seventh Super Bowl last February against the Kansas City Chiefs, firmly cementing him as the greatest in NFL history in the eyes of many.

But Morgan was left unconvinced despite admitting the 44-year-old quarterback is a “magnificent athlete” with an “extraordinary work ethic.”

He said: “For me, Brady's not even the greatest NFL star of all time – that accolade goes to Joe Montana. Even Brady has admitted that Montana ‘is in a league of his own.’”

Do you think Lionel Messi is the greatest footballer of all time? Let us know in the comments section.