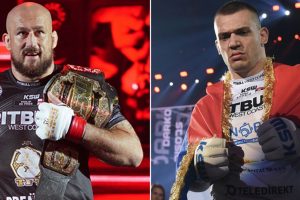 Phil De Fries will aim to defend his KSW heavyweight title against No.1 contender Darko Stosic on February 26 in a bid to extend his winning streak to nine MMA bouts.

The leading British heavyweight, fighting out of Sunderland, has successfully defended the KSW belt on five separate occasions since his 2018 win over Michal Andryszak, most recently in April.

The 35-year-old will now take on the dangerous Stosic at the Global Expo in Warsaw, Poland as the main event of KSW 67. The bout will be officially confirmed at KSW 66 on Saturday evening.

De Fries has made his name as one of the top British heavyweights on the planet having taken his overall record from 12-6 to 20-6 over the course of the last four years of fighting.

The KSW champ has battled against not only a series of toughened foes to make the belt his own, but also against severe anxiety and depression which plagued his early career.

Those struggles hampered his time working with Dana White in the UFC, a period in which he picked up two wins across five bouts, losing to the likes of Stipe Miocic and Matt Mitrione.

De Fries spent time in several promotions before making KSW his home, including UFC and Bellator among a series of English promotions, picking up notable wins over Rob Broughton and James Thompson among others.

Stosic, who also spent time in the UFC, will be the toughest challenger yet for De Fries having won all 15 of his bouts as a heavyweight since his debut back in 2012, only losing at light-heavyweight.

Will Phil De Fries defend his KSW heavyweight belt for a sixth time? Tell us in the comments section

Fans have called for the 29-year-old to get his shot at the belt following his September victory over Andryszak, which he won by the way of split decision.

Stosic joined KSW in 2021 and ran through three opponents in just seven months to book his bout against De Fries, and will only have another few weeks of waiting.

De Fries said of his KSW resurgence back in 2020: "I suffer from anxiety extremely badly, but it wasn’t until 2017 that I started getting treatment for it.

"I realised it had been holding back my career my entire life."

Adding of his move to KSW: "I always knew they were a big company and I heard they were quite good to people and stuff. But when I got there, I realised the scope, how massive it is.

"The shows are fantastic, they sell out the arena every time. It’s fanatic."