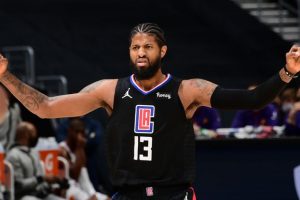 The Los Angeles Clippers ran their home record to 20-8 this season, pushing past the Phoenix Suns 113-103 in a battle of the second- and third-place teams in the Western Conference standings.

For the second straight game, Clippers star Paul George had the hot hand. Two nights after pouring in 36 points in a win over the Portland Trail Blazers, George scored 33. His 12-of-19 shooting included 7-of-9 success from 3-point range.

While George had it going early, Los Angeles’ Kawhi Leonard took over in the second half, scoring 14 of his 27 points in the third quarter. New addition Rajon Rondo did a nice job of setting the table for the Clippers off the bench, finishing with 15 points, nine assists and no turnovers.

The back-and-forth affair had 15 lead changes and was tied 10 times. The game also included an ejection when Beverley’s foul on Paul with just over seven minutes left was determined to be unnecessary and excessive after a video review.

Beverley was on a minute’s restriction, and he finished scoreless with two assists in 17 minutes.

The loss snapped Phoenix’s seven-game winning streak and dropped the Suns’ NBA-best road record to 17-7. The Clippers have won three in a row and nine of their past 11 games.

Donovan Mitchell scored 37 points and Rudy Gobert compiled an 18-point, 20-rebound double-double to lift the Utah Jazz to a big 122-103 win over the Portland Trail Blazers in Salt Lake City.

The victory snapped a two-game losing streak – the Jazz stumbled on the road at Dallas and Phoenix – and secured the 23rd consecutive victory at the Vivint Arena for NBA-leading Utah.

Four other Jazz players scored in double figures – Joe Ingles (13), Mike Conley and Bojan Bogdanovic (11), and Georges Niang (10) – as Utah bounced back 24 hours after a tough overtime loss to the Suns.

Damian Lillard topped Portland with 23 points and CJ McCollum scored 19, but the Blazers fell for the third time in four games after a disastrous seven-minute spurt midway through the second half.

It was tied, 68-68, midway through the third before the Jazz offense went berserk. Mitchell hit a jumper to give the Jazz a lead, and Utah scored 25 points in the final six and a half minutes of the quarter while holding the Blazers to just four points until Carmelo Anthony hit a late 3.

The fact that Conley played was a boon for the Jazz. He hadn’t been suiting up on the second end of back-to-back sets for months, but Utah was desperate for a win against a potential Western Conference playoff foe and the Jazz were without Sixth Man of the Year candidate Jordan Clarkson (ankle sprain) so he played.

Jimmy Butler scored a game-high-tying 28 points to lead the host Miami Heat to a 110-104 win over the short-handed Los Angeles Lakers.

Miami also got 18 points from Victor Oladipo, who grabbed his right knee after a dunk with 5:35 left in the game. He immediately went to the locker room and did not return.

Heat guard Tyler Herro, playing through an injured left foot, had 15 points. Kentavious Caldwell-Pope led the Lakers with a season-high 28 points, but Miami won in part because the Heat were plus-8 on points off of turnovers.

Andre Drummond returned for the Lakers after missing the past three games with a toe injury. He had 15 points and 12 rebounds. Guard Dennis Schroder added 10 points and a game-high 14 assists for the Lakers.

But the Lakers were once again without stars LeBron James and Anthony Davis. In addition, Kyle Kuzma sat out due to a calf strain, and Talen Horton-Tucker served a one-game suspension for his role in Tuesday’s altercation with the Toronto Raptors.

In addition, Lakers forward Markieff Morris was ejected with 2:14 left in the fourth quarter. Morris thought he was fouled on his shot, and he got the technical after arguing with a referee. Guard Ben McLemore, waived by the Houston Rockets on Saturday, made his Lakers debut and had six points.

Kristaps Porzingis added 26 points and 17 rebounds as the Mavericks won for the sixth time in the past seven games.

The Bucks played without two-time reigning MVP Giannis Antetokounmpo (knee) for the third straight game and the fifth time in the past 10 contests.

Milwaukee has lost two straight games and five of the past eight. Donte DiVincenzo made a career best six 3-pointers and scored 22 points while Bobby Portis recorded 20 points and a season-high 14 rebounds for the Bucks.

Brook Lopez added 16 points, and Khris Middleton had 14 points and eight rebounds despite shooting just 6 of 27 from the field.

Jason Richardson scored 14 points and Tim Hardaway Jr. and Maxi Kleber added 12 apiece for the Mavericks, who made 44.3 percent of their shots, including 17 of 45 (37.8 percent) from 3-point range. Porzingis scored 11 points in the fourth quarter. He drained back-to-back 3-pointers to give Dallas a 95-93 edge with 6:43 remaining.

Starters Zach LaVine and Nikola Vucevic led seven Bulls in double figures with 22 points apiece as Chicago won its third straight overall and second in a row to open a five-game trip.

With its second win over Toronto, the Bulls clinched the three-game season series despite a career game from the Raptors’ Chris Boucher, who almost single-handedly kept the hosts in the game with 38 points and 19 rebounds.

Chris Boucher is the first @Raptors player to put up 35+ PTS and 15+ REB in a game since Chris Bosh in 2010. @EliasSports pic.twitter.com/ObPGhA6rH6

LaVine completed a double-double with a game-high 13 assists for the Bulls, who had opened their trip with a 113-97 win at Indiana.

Markkanen contributed 18 points, White 15 and Theis 14, helping Chicago run up a 47-20 scoring advantage off the bench.

Pascal Siakam had 27 points and OG Anunoby 13 for Toronto, which played without injured guards Kyle Lowry and Fred VanVleet. The loss was the Raptors’ second straight after having opened a four-game homestand with wins over Golden State and Washington.

Cory Joseph scored 24 points and dished seven assists as the visiting Detroit Pistons held off a late Sacramento Kings push to win 113-101 Thursday. Isaiah Stewart recorded 16 points and a game-high 13 rebounds for Detroit, which has alternated losses and wins over the past eight games. Sacramento took its fifth straight loss.

The Pistons capitalized on a poor shooting night from the Kings, who finished 7 of 30 (23.3 percent) from beyond the 3-point arc. Detroit built a big first-half lead that gave it a cushion down the stretch.

Seven Pistons scored in double figures, including three off the bench. Rookie reserve Killian Hayes posted a career-high 11 points. Jahlil Okafor scored 11 points and hit all four of his foul shots, helping Detroit’s 17-of-20 success from the line as a team.

De’Aaron Fox finished with 23 points, nine rebounds and seven assists for Sacramento, but he shot 0 of 5 from 3-point range. Buddy Hield scored all 15 of his points from beyond the arc, going 5 of 12 from long distance. Richaun Holmes scored 15 points and grabbed nine rebounds, Harrison Barnes finished with 13 points and Hassan Whiteside added 10.

Rookie Tyrese Haliburton, coming off the bench for the first time since March 15, scored nine points and handed out seven assists.

Collin Sexton scored 27 points to lead the Cleveland Cavaliers to a 129-102 win over the host Oklahoma City Thunder.

The Cavaliers have won consecutive games for the first time since a four-game winning streak that ended March 1.

The Thunder lost their fifth straight, their longest skid since a six-game losing streak early in the 2014-15 season.

Taurean Prince added 22 points off the bench for the Cavaliers, while Garland finished with 21 points and five assists. Kevin Love had 18 points and 11 rebounds, while Isaiah Hartenstein pulled down 12 boards off the bench.

Cleveland shot 51.1 percent from the field and had 24 points off of 18 Oklahoma City turnovers.

Ty Jerome led the Thunder with a career-high 23 points, going 9 of 16 from the field with five 3-pointers. Theo Maledon had 14 points but was just 6 of 17 from the floor. Moses Brown had 13 points and 11 rebounds.