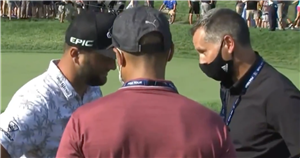 Jon Rahm was brutally told he has tested positive for Covid-19 live on television as he walked off the 18th green at Saturday's USPGA Memorial Tournament – leaving Paige Spiranac furious.

Rahm, the current world No.3, was enjoying a superb outing in Ohio after a hole-in-one on the 16th helped him move six shots clear at the top of the leaderboard.

However, the Spaniard's day turned sour when he finished up on the 18th and discovered his Covid test has come back positive, meaning he must withdraw from the tournament.

American broadcasters CBS captured the gut-wrenching moment he was told of the positive test live on air, which was followed by him bursting into tears.

And Spiranac has hit out at PGA officials for giving him the news in front of a television camera.

The golf stunner posted on Twitter: "Something we can all agree on is that telling Rahm the news by the green in front of everyone and on camera was a bad move".

Despite Spiranac's tweet, the PGA Tour have said that Rahm was given the news as he finished his round as part of "Tour protocols".

A statement read: "On the evening Monday, May 31, the PGA Tour notified Jon Rahm that he was subject to contact-tracing protocols, as he had come in close contact with a person who was Covid positive.

"Per the Tour's Covid health & safety plan, Rahm was given the option to remain in the competition and enter our tracing protocol, which includes daily testing and restricted access to indoor facilities. Rahm has remained asymptomatic.

"Rahm has tested negative every day, but his most recent test – which was performed after the conclusion of his second round (rain delayed) and before the start of his third round – returned positive at approximately 4.20pm Eastern Time while Rahm was on the golf course. The PGA Tour's medical advisor requested a confirmatory test on the original sample, which came back at 6.05pm ET, and was also positive."

Rahm, who must now isolate for 10 days, said: "This is one of those things that happens in life, one of those moments where how we respond to a setback defines us as people.

"I'm very thankful that my family and I are all OK. I will take all of the necessary precautions to be safe and healthy, and I look forward to returning to the golf course as soon as possible."

READ MORE:Golfer terrorised by evil swan who chases him around green while trying to putt