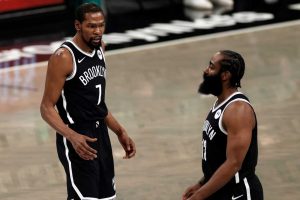 The Brooklyn Nets had the worst possible start to Game 1 against the Milwaukee Bucks. The Nets had a play called. Kevin Durant searched for James Harden, and Harden wasn’t where he was supposed to be.

"I looked at him," Durant said. "He was grimacing."

Harden left the game 43 seconds into the first quarter with a right hamstring issue, and TNT reported he left the arena for an MRI.

Given that circumstance, the Nets had the best possible finish to Game 1, albeit with worry over Harden's hamstring. Minus Harden, the Nets defeated the Bucks 115-107 in the opener of their Eastern Conference semifinal series.

"I was really impressed with our perseverance in what could have been an emotional toll on us," Nets coach Steve Nash said. "To get out of the first round and prepare for a few days for this series and have our lead playmaker go down in the first minute, that could derail a team. But our guys have been through this and they hung in there and their toughness was on display."

Jim Owczarki of the Milwaukee Journal Sentinel and Duane Rankin of the Arizona Republic break down how the Bucks match up with the Nets in the second round of the NBA playoffs.

Nash didn’t know the severity of Harden’s injury, but certified athletic trainer Jeff Stotts, who tracks player injuries in a database, tweeted, "He was going to be at an increased risk for recurrence for the remainder of the season, especially since he already aggravated the injury site during his initial rehab. Data shows the average time lost increases with each subsequent strain."

That could be bad news for the Nets and Harden, who missed 21 of the final 24 regular-season games with a strained hamstring.

"We’ll have to see how we go here and watching the film and taking a look at our rotations and our options," Nash said, "and see what buttons we can push and persevere."