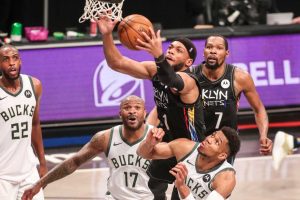 It seems Milwaukee’s issues are compounding exponentially. Every Nets starter had more points than Giannis Antetokounmpo in the first half.

Another problem: Right now, the Nets don’t need James Harden to defeat the Bucks. Harden played just the first 43 seconds of Game 1 and he sat out Game 2 with a hamstring issue.

At halftime, TNT’s Charles Barkley said the Bucks should be embarrassed, and that was before Brooklyn opened a 30-point lead in the third quarter.

The Nets bulldozed the Bucks, 125-86, on Monday in Game 2 of their Eastern Conference semifinals series.

It’s as lopsided as a 2-0 series can be, and the Bucks are facing short- and long-term questions about their championship chances.

Over the past few seasons, a discouraging trend has emerged for Milwaukee. Under Coach Mike Budenholzer, Antetokounmpo and the Bucks are a great and sometimes dominant regular-season team, but do not have what’s required to win a championship. In a seven-game series deeper into the playoffs, their offensive and defensive shortcomings are exposed.

Stopping Brooklyn is a challenge even for a supposedly good defense like the Bucks. But Milwaukee should be able to score against Brooklyn, which finished with the league’s 23rd-ranked defense and was only marginally better in the final two months of the season.

Antetokounmpo didn’t make a shot outside of the paint in Game 2, and his 18 points and 11 rebounds were obscured by Brooklyn’s offense. The two-time MVP should be able to take over and put his team in position to win these games. He has had memorable playoff performances. He needs more.

And, of course, he needs help. Those team shooting stats won’t beat many teams in a playoff series.

Understood, it’s just two games, and just two seasons ago, the Bucks were up 2-0 against Toronto and a double-overtime loss in Game 3 from a 3-0 series lead. And the Raptors won the series. So, it’s possible.

"They've won two games at home," he said. "Now, it's our turn. We've all seen it a thousand times before. You've all heard it. We've got to go and protect our home court just like they protected theirs. … We've got to go home and play better."

But nothing has happened in two games that indicates Milwaukee has what it takes. The Bucks made moves – adding Jrue Holiday and P.J. Tucker and signing Antetokounmpo, Middleton and Holiday to long-term deals – they believe made them a championship contender. They are not right now and brings into question issues beyond this season.

This isn’t about wanting it more or playing with more heart or soul searching. Certainly, more made shots and a flicker of competitive fire would help. This is about being overmatched and not having the answer to combat it.

“The loss sucks,” Holiday said. “It’s very frustrating to lose like that or even lose at all. We feel we’re better than we’ve played. We know that. But that at his point, you can’t really be down and you have to stay positive. We’ve got to be able to just lock in, go back and look at the film, pay attention to detail, especially defensively.”