Home » Opinion: James Harden has been a seamless fit with Nets after messy Houston departure

Opinion: James Harden has been a seamless fit with Nets after messy Houston departure 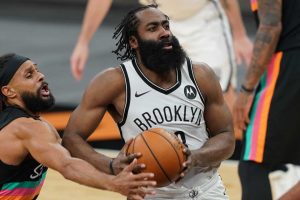 After the Houston Rockets ignored his offseason trade requests, Harden arrived to training camp late and out of shape. Then he broke the league's health and safety protocols. In between strong performances, Harden then alienated his teammates and coaches during practices and games. So when the Brooklyn Nets (23-13) play the Rockets (11-22) on Wednesday, perhaps the 4,500 fans boo Harden in what will mark his first trip to Houston since he was to Brooklyn in mid-January.

"There will be no tension and no (trash) talking going on the court or about James or my presence or anybody else’s presence," Nets guard Kyrie Irving said. "We’re coming to Houston to enjoy the game of basketball and play it at a high level on behalf of James and the rest of the guys because we know it’s a special night, regardless. He’s going back to where you started it all and where he started making a huge jump in his career. We know what it means for everybody on the outside. But internally, we’re just going to play the game that we love."

Harden expressed optimism that "hopefully those fans appreciated everything that I’ve done on the court and off the court." Perhaps it might be too early for Rockets fans to cheer Harden for guiding the franchise to two Western Conference finals in eight playoff appearances, while collecting three scoring titles and a regular-season MVP award. It seems perfectly appropriate, however, to praise Harden for how he has fit in seamlessly with the Nets thus far.

He arrived amid various amounts of skepticism from those around the league and in the media, including myself. After clashing in previous years with Dwight Howard, Chris Paul and Russell Westbrook, could Harden co-exist with Irving and Kevin Durant? After spending most of the time in Houston playing isolation basketball, would Harden become a more willing passer? After showing immature behavior before his departure in Houston, would Harden exhibit similar behavior if things did not go his way in Brooklyn? After shattering scoring records in Houston, could Harden blend his dominant scoring while tapping into his passing and defensive potential?

Don’t look now, but Harden has answered all of those questions in nearly every way since his arrival.

"He literally can do almost everything there is to do out there, and he’s been a great leader for us," Nets coach Steve Nash said. "He can control the game. He is a very smart defender. I think he’s been outstanding as far as keeping his team on track — leading, talking things out, communicating. His passion for the game and willingness and want to win have been fantastic."

Granted, Harden will be judged more on if he can help the Nets win an NBA championship and less on how he navigated the honeymoon stage. Although the Nets wish they had more than seven games for Durant, Harden and Irving to play together, the overlapping absences to Durant (10 games) and Irving (five) theoretically reduced any potential tension in figuring out the on-court dynamics among three stars. And after finishing with a poor defensive rating through eight games with Houston (117), Harden has only shown marginal improvement through 13 games in Brooklyn (114.9).

Still, Harden has consistently thrived through other circumstances. When the three stars have played together, Harden has averaged 20.4 points while shooting 47.1% from the field and 43.19% from 3-point range along with 12.6 assists and 7.7 rebounds. When either Durant or Irving have sat out, Harden has simply increased his scoring workload.

In the seven games that Harden and Irving played without Durant, Harden has averaged 25.5 points while shooting 48.9% from the field and 46.7% from 3-point range along with 8.5 assists and 7.0 rebounds. In the two games Durant and Harden played without Irving, Harden increased his workload in scoring (33 points on 48.8% shooting), assists (13) and rebounds (9.0) while regressing in outside shooting (30%). In the three games Durant and Irving both sat out, Harden averaged 31 points while staying efficient from the field (52.3%) and from 3-point range (40%), along with a high volume of assists (9.0) and rebounds (7.3). Whenever Durant returns from the left hamstring injury that will sideline him through at least the All-Star break, expect Harden to seamlessly reduce his scoring output while increasing his playmaking.