Home » Opinion: Have the Celtics finally put their early-season struggles behind them?

Opinion: Have the Celtics finally put their early-season struggles behind them? 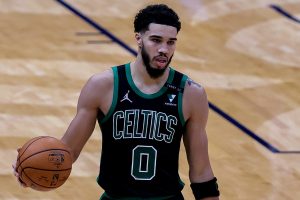 As they have experienced season-long inconsistency and a recent winning streak, the Boston Celtics have traveled two parallel tracks.

On one, they can usually rely on Jayson Tatum or Jaylen Brown as they've blossomed into All-Stars. In the Celtics’ 119-114 victory over the Golden State Warriors on Saturday at TD Garden, Tatum finished with 44 points to compensate for Brown's absence and to offset Stephen Curry’s 47 points. At other times, Brown has carried the team.

On the other track, Boston rarely knew what it would receive from the rest of the supporting cast. Against the Warriors, Kemba Walker (26 points, eight rebounds) and Marcus Smart (16 points, nine rebounds, six assists) stepped into the role. Walker drilled a 25-foot step-back 3 for a 116-11 cushion with 24.8 seconds remaining. Smart grabbed a key offensive rebound and drained a 3-pointer to give the Celtics a 111-109 lead with 1:16 left. Jabari Parker (11 points) and Payton Pritchard (11) also contributed.

But with significant injuries this season to Walker and Smart, the Celtics never had a definitive third guy to represent a Big 3. The rest of Boston’s roster represented a handful of veterans (Tristan Thompson), rookies (Pritchard, Aaron Nesmith) and other young players (Grant Williams, Robert Williams III, Romeo Langford, Carsen Edwards), all of whom showed mixed progress.

"I don’t rank guys. We just try to win basketball games and all play together," Boston coach Brad Stevens said. "We’re not looking for first, second, third, fourth, fifth, sixth, seventh, eighth. It’s just how can we all make the right basketball play. So we need them both to be very good and we need everybody around them to be very good."

So what should we make of the Celtics (31-26) and their fourth-place standing in the Eastern Conference?

After advancing to the conference finals three times in the past four years, are the Celtics underachieving this season? Or after winning six consecutive games and eight of their last nine, are the Celtics finally showing their true identity? Or is the reality somewhere in between?

"I don’t think our record shows the kind of team we are," Tatum said. "I think people know that. It’s been a weird role. Obviously, we’ve dealt with a bunch of things."

Jayson Tatum and the Celtics have climbed to fourth place in the Eastern Conference with their season-high six-game win streak. (Photo: Stephen Lew, USA TODAY Sports)

The Celtics had three games postponed because they did not have enough healthy players due to the NBA’s safety protocols, including Tatum, who missed five games after testing positive for the coronavirus. Tatum has since compiled two Eastern Conference Player of the Week awards, including last week when he averaged 31.5 points and 8.5 rebounds over four games. But Tatum revealed that he has had breathing issues ever since contracting COVID-19 and that he is "very close" to feeling normal.

"It takes a long time. I take an inhaler before the game since I tested positive to help with that and open up my lungs. I never took an inhaler before," Tatum said. "That’s something different. I for sure feel better now than I did a month ago."

The Celtics also experienced absences elsewhere. Walker missed 17 games to strengthen his left knee after dealing with various complications during last year’s bubble. Smart missed 19 games, many of which stemmed from a torn left calf. Thompson missed 14 games after testing positive for COVID-19.

"The No. 1 reason for our little run is we’ve been, for the most part, healthier," Stevens said. "We just missed lot of guys earlier. I know that sounds like an excuse. I hope it doesn’t. But we tried to stay afloat as well as we could and hope we get to a time where we’re a little bit healthier and put together some weeks of good basketball. Through all of that, our guys have done an incredible job of staying together."

After the Celtics win Brad Stevens gives credit to Steph and praises the C’s perseverance over the season pic.twitter.com/hS9DfPNf8M

The Celtics have become accustomed to dealing with roster turnover, even during their recent runs to the East finals.

After the Celtics used the No. 3 pick in subsequent drafts on Brown (2016) and Tatum (2017), they saw those two young players develop while struggling to maintain the additional talent needed to make a title run. The Celtics thought they did that after acquiring Kyrie Irving from the Cleveland Cavaliers and signing Gordon Hayward as a coveted free agent. But Irving offered mixed results with his locker room leadership and health. Hayward also stayed sidelined with various injuries. Then in consecutive years, Irving (2019) and Hayward (2020) left as free agents without the Celtics yielding anything in return in possible sign-and-trades.

Boston still added some key pieces last summer by signing Thompson after he helped the Cavaliers win an NBA title out of four Finals appearances. The Celtics may have missed on signing LaMarcus Aldridge or Andre Drummond on the buyout market. But they acquired Evan Fornier from the Orlando Magic for struggling Jeff Teague and two second-round picks. Fornier has played only four games thus far and been mostly sidelined because of health and safety protocols, but he is expected to boost the Celtics’ secondary scoring sometime this week after recently clearing quarantine. Boston also signed Parker, a former No. 2 pick that can offer scoring, though he has labored through right knee injuries during his career.

Therefore, the Celtics have downplayed whether their early-season struggles will have any big-picture implications. They've suggested as much with their six-game winning streak.

"That goes out the window when you start the playoffs. It’s all about matchups," Thompson said. "It doesn’t matter what your seeding is. As long as you’re healthy and match up with a team, you can win. Anything is possible."

Does that mean it is possible the Celtics can challenge the Eastern Conference elite?