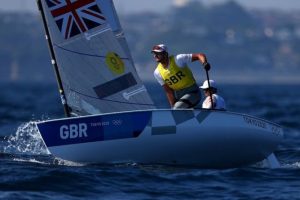 Team GB sailors will have to wait for their chance to win a medal after the Olympic programme was cancelled on Monday. Charlotte Dobson and Saskia Tidey were scheduled to compete in the women’s skiff final.

While Britain’s Dylan Fletcher and Stuart Bithell were getting ready for the men’s skiff final later in the day.

It was all set up to be a great day for Team GB in the water at Enoshima with plenty of medals up for grabs.

But the day’s action has now been postponed due to weather conditions.

World Sailing confirmed the news on social media after monitoring the weather conditions.

“Racing is unfortunately postponed for today, with wind conditions too light to compete in,” they wrote.

Winds reportedly need to be at least six knots for racing to go ahead, which wasn’t the case on Monday.

But the races have now been pushed into Tuesday’s schedule, which also includes two more medal hopes for Team GB.

Giles Scott is running in the one person dinghy heavyweight final with John Gimson and Anna Burnet competing in the mixed multihull Nacra-17 final.

Dobson and Tidey currently sit fifth in the women’s skiff and in a good position to medal.

Fletcher and Bithell though will have their eyes on gold as they sit second behind defending champions Peter Burling and Blair Tuke.

Meanwhile, Scott is already assured of a medal in the men’s Finn class with Gimson and Burnet also guaranteed a podium in the Nacra-17.