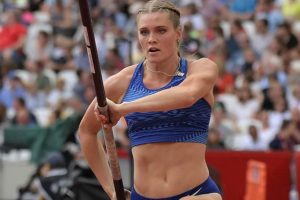 Pole vaulter Alysha Newman has combined her preparations for her second Olympic Games with the launch of her own page on the content subscription site OnlyFans.

Newman announced her decision to join the site at the end of June in a post on her Instagram account ahead of her second appearance at an Olympic Games.

She will appear in the opening round of the pole vault on Monday at the Tokyo Olympic Stadium, hoping to reach her first Olympic final.

Newman announced to her 520,000 Instagram followers on June 30 that she was now on OnlyFans in a post captioned: "Your wish is my command… Now on OnlyFans."

Fans of the athlete have been calling for her to join the website for a long time due to her history of posting bikini pictures on social media.

She also featured in a lingerie advert for Agent Provocateur in 2020 alongside a number of her fellow female Olympians and she was named in Maxim's Hot 100 Women list earlier in 2021.

Will Alysha Newman's decision to join OnlyFans hinder her Olympic medal hopes? Leave your thoughts in the comments section below.

The Commonwealth Games champion and record holder is also a former gymnast, having retired from the sport aged 13 after suffering a serious back injury.

The Nike athlete is also a five-time All-American and has a personal best of 4.82m in the pole vault, but did not advance to the final of the event five years ago in Rio.

She has since finished fifth at the World Championships in Doha back in 2019 and goes into the Tokyo games ranked number five in the world with a season's best of 4.65m.

Newman has more strings to her bow beyond athletics and modelling, having graduated from the University of Miami with a degree in Human Movement Studies and Sports Science in 2016.

She will appear in the first qualifying group for the pole vault on Monday, where clearing a bar of 4.70m will guarantee a place in Thursday's final, finishing in the top 12 across both groups will also be enough to qualify.

Holly Bradshaw is the sole British athlete competing in the event and goes into her third Olympics ranked number six in the world.