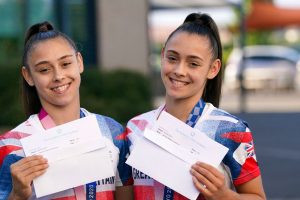 The 16-year-old twins were awarded distinctions just days after competing at the 2020 Olympic Games and winning a bronze medal.

They clinched a spot on the Olympic rostrum in the gymnastics team all-around event alongside Alice Kinsella and Amelie Morgan.

This was Britain’s first podium finish in that event for 93 years.

The pair have had to juggle training with their studies, of which they have done an outstanding job.

The elated twins appeared on Good Morning Britain today to chat about their impressive results.

Jessica added: “We just wanted the pass and that's what we got so we're happy to move on. We're not sure what the plans are [for celebration] but I'm sure there'll be one.”

The duo then commented on how they were able to deal with the pressure of juggling their education with training for the Olympic Games.

They added: “It was quite difficult because we tried to fit training in as much as possible and tried to get those extra hours but at the same time we needed time to study for our GCSEs.

“But with the school's help and everyone's help we managed to juggle it quite well.

“When we were at the Olympics we tried to not put any pressure on ourselves, and just focus on enjoying the moment and not worry about 'I'm not doing this right’

“Whatever happens, happens, you can't go back and change it, so we just tried to enjoy the experience.”

Born in Dublin but now living in Aylesbury, Buckinghamshire, the Gadirova twins also reached individual finals at the Tokyo Olympics.

Jessica finished sixth in the women’s floor final with a score of 14.000, while sister Jennifer finished seventh, registering a score of 13.233.

The duo had arrived at their debut Olympics admitting they were in awe of stars like gymnastics legend Simone Biles.

However, the twins illustrated their tremendous potential in their debut Olympics and will be forces to be reckoned with come Paris 2024.