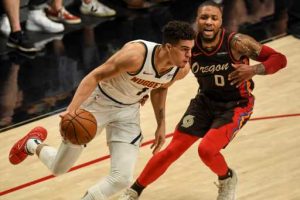 1. MPJ starts hot. Michael Porter Jr. turned in arguably the most impressive scoring performance of his young playoff career in Game 6 against the Blazers. The second-year pro connected on his first six shots from the floor, including five consecutive 3-pointers. He closed the first quarter with a stunning 22 points on 8-of-10 shooting. Many of his buckets resulted from efficient pick-and-rolls or smart cuts away from the ball. Porter was active on defense as well with a steal and transition dunk in the second quarter. But his scoring production dropped significantly after halftime.

2. Where is the D? The Nuggets and Blazers delivered spectacular offense at the Moda Center. Their combined defense was less impressive. Portland hit triple-digits scoring in the third quarter with all five starters in double-figures. Denver entered the fourth with 98 points while shooting 50% from the floor as a team. It’s entirely possible that lackluster defense resulted from the physical toll of a marathon Game 5 played only two nights before Game 6. Or maybe this series has simply featured two of the top offensive teams in the NBA.

3. Joker foul trouble. The Nuggets trailed Portland 33-29 following the first quarter amid the glaring absence of Nikola Jokic. The likely MVP did not attempt a single shot. The reason? Jokic endured two early fouls and coach Michael Malone subbed him out from the game after playing only 6 minutes. It marked the first real foul trouble for Joker in this series. Luckily for Denver, MPJ picked up the scoring slack in the opening quarter. But give Jokic credit. He maintained aggression while staying out of foul trouble for the rest of the night and led the Nuggets in scoring. Jokic dropped 20 points in the third quarter alone.