Home » NBA » No. 1 vs. No. 2: Previewing the first matchup between Cade Cunningham and Jalen Green

No. 1 vs. No. 2: Previewing the first matchup between Cade Cunningham and Jalen Green 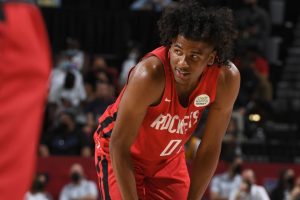 Jalen Green has never been shy about where he stands among prospects in the 2021 NBA draft.

“Me, I’m the best prospect in this draft, in my opinion,” Green told me during an ESPN Film Session. “I didn’t go to college, and I played against grown men. I just think as a 19-year-old doing that, I’m the best player in the draft for sure.”

On Tuesday in Las Vegas, No. 2 pick Green will have his first opportunity to prove it, as the Houston Rockets clash with top pick Cade Cunningham and the Detroit Pistons.

This won’t be their first meeting, as Cunningham and Green have long been Class of 2020 foes jockeying for the top spot in the high school rankings. Green, who once held the distinction as the top prospect, eventually finished No. 3 in the Recruiting Services Consensus Index (RSCI) rankings behind Cunningham (No. 1) and Evan Mobley (No. 2).

Cunningham and Green were teammates on the gold-medal-winning 2019 U.S. U19 World Cup team that also featured Jalen Suggs, Tyrese Haliburton, Reggie Perry and Jeremiah Robinson-Earl. Cunningham started all seven games and finished with averages of 11.7 points, 4.9 rebounds and 5.7 assists in 23.5 minutes, while Green played 21.5 minutes off the bench, scoring 10.1 points and collecting 1.7 steals with a handful of highlight-reel plays.

Since then, Green has filled out his frame, fine-tuned his shooting and evolved into an elite scoring guard who still qualifies as a teenager. Cunningham is coming off an impressive freshman season in Stillwater with the Cowboys, highlighted by a win over the eventual national champion Baylor Bears, a 40-point game against the rival Oklahoma Sooners and Big 12 Player of the Year honors.

So what should fans expect from No. 1 vs. No. 2 facing off in Vegas? Let’s break it down.