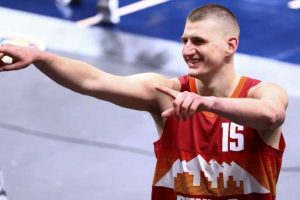 Back in June 2014, the Nuggets landed a little-known big man out of Serbia with the No. 41 overall pick in the NBA Draft. The selection was not seen on ESPN because the network was airing a . . . Taco Bell commercial.

Nearly seven years later, Nikola Jokic was front and center on national television to accept the 2020-21 NBA Most Valuable Player award, making him the lowest drafted player to ever be named MVP. (Three-time MVP Moses Malone was selected in the 1974 ABA Draft out of high school, then jumped to the NBA as part of the 1976 ABA Dispersal Draft.)

NBA AWARDS: List of winners for MVP, ROY and more

In a season that featured major injuries to some of the league’s biggest stars and long absences because of health and safety protocols, Jokic was a model of consistency, becoming the first MVP to play in every regular-season game since Kobe Bryant in 2008. He carried Denver to a 47-25 record and the No. 3 seed in the Western Conference despite the fact that he didn’t have Jamal Murray for an 18-game stretch to end the season after he tore his ACL in April.

“He is tasked with a tremendous responsibility of being the focal point of our offense, being the anchor of our defense,” Nuggets coach Michael Malone said of Jokic. “And he never complains. He goes out there and does his job to the best of his ability every single night.”

But Jokic’s campaign should not be reduced to his durability. His MVP case was always about more than his minutes advantage over Stephen Curry, Joel Embiid and other candidates.

In 72 games, Jokic averaged 26.4 points, 10.8 rebounds and 8.3 assists, joining Oscar Robertson and Russell Westbrook as the only players to hit the 25-10-8 thresholds for a full season. He finished in the top five in total points, rebounds and assists. He shot 56.6 percent from the field, 38.8 percent from 3-point range and 86.8 percent from the free throw line. When Jokic played, the Nuggets posted an offensive rating of 120.2. When he sat, that number dropped to 103.4. That’s the difference between being the top offense in the league and being slightly better than the Thunder.

To put it simply, Jokic turned into an offensive cheat code. At 6-11 and 284 pounds, he dominated weaker defenders in the post. His improved shooting made him a perimeter threat. His elite passing allowed him to serve as a point-center in transition and half-court sets. He had all of the answers before the test even started.

While he will never be confused for an Embiid-like defensive force, Jokic has shown improvement on that end. He knows how to put himself in the right positions defensively, and he often anticipates the play before it happens. That’s why he finished sixth in the NBA in total deflections and 11th in total steals.

“Is he an athletic shot blocker? Is he going to be blocking shots out of the air? No, he’s not,” Malone said. “That’s not his game. But he has a high IQ. He’s the anchor of our defense. He communicates our defense. And he does a lot of things that may not show up on stat sheets.”

But in the end, those arguments didn’t hold much weight, and voters recognized the unassailable truth. Jokic collected 91 of 100 possible first-place votes, shutting down any possible controversy.

That goofy Serbian guy, the same one who got drafted while a voice actor waxed poetic about the quesarito, is now part of one of the NBA’s most exclusive groups. He absolutely earned his spot.