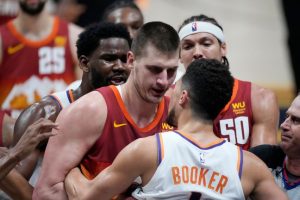 With Denver down by eight points and the series quickly slipping away, the MVP Nikola Jokic’s frustration got the better of him.

He had just missed a contested floater thanks to some physical defense from Deandre Ayton – a theme throughout this one-sided Western Conference semi-final – and looked at the ref for a foul call. None was coming.

Then, probably through desperation more than anything, the Serbian center decided to lunge in on Cameron Payne for a steal. It was a misguided and rather clumsy attempt and Jokic’s heavy swipe at the ball appeared to catch the Suns’ guard in the face.

Things quickly escalated, with Devin Booker rushing over to confront Jokic. The two briefly squared up to one another, exchanging words and shoves, but were eventually separated by their teammates.

After a review by the officials, Jokic was ejected for a flagrant 2 foul, which are given for “unnecessary and excessive contact committed by a player against an opponent.”

Officials cited the “windup, impact, and follow-through” for the flagrant 2 foul, requiring an ejection, as opposed to a flagrant 1.

After several minutes down on the court, Payne stayed in the match and hit both free throws from the foul.

“I thought honestly they would not eject me,” Jokic said after the game.

“I wanted to change the rhythm of the game, I wanted to give us some energy, maybe change the whistle a little bit, so I wanted to make a hard foul. Did I hit him, did I not hit him? We don’t know. So I say sorry if I did because I did not want to injure him or hit him in the head on purpose.”

Jokic also stressed the need not to overreact to what was a disappointing end to an otherwise fantastic season that saw him crowned MVP – the lowest draft pick ever to do so and the first true center to win the award since Shaquille O’Neal in 2000.

“Of course that didn’t go like how we wanted, they beat us, they whooped our ass but I think the whole team needs to walk out the arena with head up. It is what it is, you know? Sometimes you need to accept the loss, sometimes someone can beat you. Accept it and try to be better. Don’t try to think about it too much, you can not change it so the whole season was great, I think, until the last four games.”

The MVP shook Cameron Payne’s hand and appeared to apologise to the player before leaving the court.

Booker, who was given a technical foul for the confrontation, said Jokic’s foul was an “emotional play”.

“I don’t think he meant harm by it,” Booker said. “Just a frustration foul. It’s tough, just defending my teammate, that was it.”

“I seen him go up to (Cameron Payne) after and apologise and I’ve played against the Joker multiple times, I know he’s not a malicious player.”

Jokic finished the night with 22 points, 11 rebounds, and four assists in 28 minutes while Booker had 34 points, 11 rebounds and 4 assists as the Suns won 125-118 to sweep the series and progress to the Western Conference Finals, where they will now face either the Utah Jazz or Los Angeles Clippers.