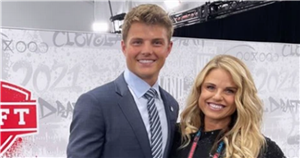 Zach Wilson was drafted second overall by the New York Jets at Friday’s 2021 NFL Draft – but it was his mum who accidentally stole the show.

After commissioner Roger Goodall revealed Trevor Lawrence was the No.1 pick for the Jaguars, Wilson and his family prepared for a celebration in their backstage pod at Cleveland’s FirstEnergy Stadium.

Wilson’s name was then called as the second pick for the Jets, and in a behind-the-scenes clip the quarterback can be seen looking down at mum Lisa and hugging her as the tears begin to flow.

Lisa quickly became a trending topic on Twitter on the night, with fans clearly left in awe.

One user wrote: “Zach Wilson’s mom is the real MVP of this draft so far”.

While a third commented: “We gotta draft Zach Wilson’s mom instead”.

She is a self-described “fitness fanatic” and “intuitive cook” on her @lifeaccording2lisa page, where she regularly posts about her favourite dishes as well as her famous family.

Wilson was absolutely delighted after officially being drafted to the Jets, insisting he will give his all for the team.

“I’m going to give it everything I have. There’s not another team I’d want to play for besides the Jets,” he told the NFL Network.

“I’m going to give it everything I have and we’re gonna be a special team, baby. We’re going for the Super Bowl.”

The Jets also traded up for the No.14 pick to draft in USC offensive lineman Alijah Vera-Tucker.