Home » NBA » Nets Kevin Durant on Kyrie Irvings part-time status: Im not about to force somebody to get a vaccine

Nets Kevin Durant on Kyrie Irvings part-time status: Im not about to force somebody to get a vaccine 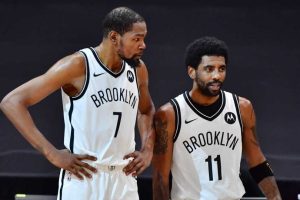 With Kyrie Irving recently rejoining the Nets on a part-time basis, the team is adjusting to his limited availability.

After impressing in his season debut against the Pacers, Irving could not take the floor for a home game against the defending champion Bucks due to New York City regulations for persons that are not vaccinated for COVID-19. As a result, the Nets trailed by as many as 24 points as the Bucks cruised to a wire-to-wire victory.

It’s clear that Irving’s presence was sorely missed. Following the loss, Kevin Durant was asked if he had spoken with Irving about his part-time availability, to which he provided an honest answer.

“I told him how important he is — how much I want him to play every game,” Durant began. “But like I said, I’m not about to force somebody to get a vaccine, like, that’s not my thing. So he can play basketball? Nah, I’m not about to do that.”

After Nets general manager Sean Marks said Irving would not be permitted to be a part-time participant ahead of the season, the franchise changed its course in mid-December, paving the way for Irving’s return to the lineup to start the new year.

Durant admits that, while he won’t force Irving to make a decision one way or another, they have had conversations about his availability. Durant said it’s ultimately a personal choice.

“We’ve had conversations about wanting him to be a part of the team and conversations about him being here full-time but that’s on his time,” Durant added. “Whatever decision he wanna make, he’s gonna make. It’s on us to come in here and be professionals no matter what.”

The Nets fell to 24-13 on the season with the loss to the Bucks, good for second in the Eastern Conference. As much as Irving will help the team in games away from Brooklyn, the Nets are actually 14-3 on the road and a pedestrian 10-10 on their home floor.

The issues might run deeper than not having Irving around.